Om (also spelled Aum) is a Hindu sacred sound that is considered the greatest of all mantras.
The syllable Om is composed of the three sounds a-u-m (in Sanskrit, the vowels a and u combine to become o) and the symbol's threefold nature is central to its meaning. It represent several important triads:
* the three worlds - earth, atmosphere, and heaven
* the three major Hindu gods - Brahma, Vishnu, and Siva
* the three sacred Vedic scriptures - Rg, Yajur, and Sama
Thus Om mystically embodies the essence of the entire universe. This meaning is further deepened by the Indian philosophical belief that God first created sound and the universe arose from it. As the most sacred sound, Om is the root of the universe and everything that exists and it continues to hold everything together.
The syllable is discussed in a number of the Upanishads, which are the texts of philosophical speculation, and it forms the entire subject matter of one, the Mandukya.
AUM is a bow, the arrow is the self,
And Brahman (Absolute Reality) is said to be the mark.(Mandukya Upanishad)
All those activities which people start with uttering the syllable OM do not fail to bear fruit. (Shankaracharya's Commentary on the Taittriya Upanishad 1.8.1)
In the Puranas the syllable Om became associated in various ways with the major Hindu devotional sects. Saivites mark the lingam (a symbol of Shiva) with the symbol for Om, while Vaishnavites identify the three sounds as referring to the trinity of Vishnu, his wife Sri, and the worshiper.
Om is spoken at the beginning and the end of Hindu mantras, prayers, and meditations and is frequently used in Buddhist and Jain rituals as well. Om is used in the practice of Yoga and is related to techniques of auditory meditation. From the 6th century, the written symbol of Om was used to mark the beginning of a text in a manuscript or an inscription. Om Parvat, a sacred peak at 6191m in the Indian Himalayas, is revered for its snow deposition pattern that resembles Om.
More Detailed Symbolism 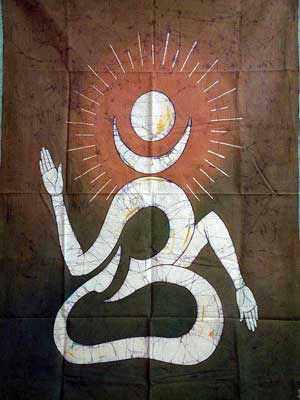