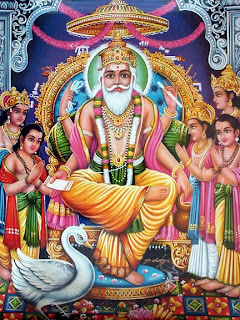 Vishvakarma (Tvastri) is the Hindu presiding deity of all craftsmen and architects. He is the "Principal Universal Architect", the architect who fabricated and designed the divine architecture of the Universe at the behest of Brahma, the Lord of Creation. He is called 'Devashilpi' or 'The Architect of Gods'. His mother was Yogasiddha, sister of Brihaspati. His father was Prabhas, the eighth hermit of the legendary Astam Basu.

Vishvakarma, the Architect of the Gods, is the presiding deity of craftsman, artisans and builders in the Hindu cosmology. He is the manifestation of the creative power of the Supreme Being and designed the tripartite universe consisting of the mortal world, the heavens and the netherworld at the behest of Brahma, the Creator. Vishvakarma also built the palaces of the Gods as well as their many weapons and chariots. Although a minor divinity within the Hindu pantheon, Visvakarma is frequently mentioned in the Vedas and other scriptures in his capacity as the Celestial Architect.

The Rig Veda describes Viswakarma as the god with multi-dimensional vision and supreme strength. He is able to predict well in advance in which direction his creation will move. In later mythology sometimes identified with Tvastr, he is the divine craftsman of the whole Universe (RV 10.81.3), and the builder of all the gods' palaces. Vishwakarma is also the designer of all the flying chariots of the gods, and all their weapons and divine attributes. He is said to have revealed the Sthapatyaveda or fourth Upa-veda, and presides over the sixty-four mechanical arts.

Tvastri, or, as he is called in the later works, Visvakarma, is the architect and workman of the gods—the Hindu Vulcan. The heavenly places were formed by him, and the warlike gods are indebted to him for their wonder-working weapons. He sharpens the iron axe of Brahmanaspati (Agni), and forges the thunderbolts of Indra. He is intimately associated with men; he forms husband and wife for each other from the womb, and blesses the married couple with offspring. This accounts for the fact that the wives of the gods are his most constant companions. He made the world and all that is in it; and he is the protector of the creatures he has made. He shares with the other gods in the sacrifices offered by mortals.

Tvastri is in several passages connected with the Ribhus. These were sons of a man named Sudhanvan; who, owing to their great skill in working, obtained immortality and divine honours. The Ribhus made Indra's chariot and horses; also by their great austerities restored their parents to youth. They are spoken of as the pupils of Tvastri. It was through their skill in manufacturing four sacrificial cups out of one their master had fashioned that they became divine. This exhibition was made at the command of the gods, and exaltation to deity the promised reward. Tvastri was very angry at their success; and, ashamed of being seen, hid himself amongst the women. It is said that he even tried to slay his pupils. According to other accounts, he admired their skill and was pleased at the result. Tvastri was the father-in-law of Vivasvat (the Sun).

Indra is occasionally described as being in a state of hostility towards Tvastri and his son Visvarūpa, and ultimately caused the death of both. This Visvarūpa had three heads, called respectively, the Soma-drinker the Wine-drinker, and the Food-eater. On one occasion he declared in public that the sacrifices should be shared by the gods only; but in private he said the asuras (demons) should share them too. And as it is customary to keep promises that are privately made, Indra was afraid that the asuras, obtaining a share of the sacrifices, would be so strengthened as to be able to overthrow his kingdom; he therefore cut off the heads of Visvarūpa with his thunderbolt. The three heads were turned into birds: the Soma-drinker became a Kapinjala (a Francoline partridge), for Soma was of a brown colour the Wine-drinker became a Kalavinka (sparrow), because when men are intoxicated they make a noise like a sparrow; the Food-eater became a Tittiri (partridge), which consequently has a great variety of colour, for its body appears to be sprinkled with glut-and honey. Tvastri, enraged because Indra had slain his son, made a libation to the gods, but did not invite Indra to it. Indra, noticing this slight, by force took the vessel containing the Soma juice, and drank it. But he drank more than was good for him. Tvastri, being angry, at once broke off the sacrifice, and used the few drops of Soma left to give effect to a curse. He employed the right formula for accomplishing the death of Indra, but unfortunately laid stress upon the wrong word. So, instead of slaying Indra, he was himself slain by him.

In the Purānas, Tvastri appears under the name of Visvakarma. In the "Vishnu Purāna" he is styled "the author of a thousand arts, the mechanist of the gods, the fabricator of ornaments, the chief of artists, the constructor of the self-moving chariots of the deities, by whose skill men obtain subsistence." Though not named as an Āditya in the Vedas, he is generally reckoned as one in the Purānas. In other places he is called a son of Brahmā.

The literal meaning of the title Vishvakarma is “all-maker” (vishva means ‘all’ and karman means ‘maker’ or ‘doer’). The Rig Veda refers to Vishvakarma as the divine architect of the universe, a personification of the creative power of the Supreme Being.

Wise and mighty, Vishvakarma is usually portrayed as a powerfully built and aged deity. Although the Rig Veda describes him as having “eyes, mouth, arms and feet on all sides”, most popular representations show Vishvakarma with one face and four arms. He is usually depicted covered in gold jewelry, holding a water pot, a book, a noose and craftsman’s tools in his four hands. Because he represents an active creative power, Vishvakarma is portrayed with a reddish hue, with red being the color of passion and activity in Hindu philosophy. His mount, like Brahma, is a white swan.

Vishvakarma is the father of five great Hindu sages according to the Vedas, each of whom was master of a craft. Highly talented and versatile in their own fields, the sons of Vishvakarma were respectively the first blacksmith, first carpenter, first founder, first mason and first goldsmith. Each gave rise to the major artistic lineage in their respective fields, and artisans and craftsman in India continue to identify themselves with Vishvakarma through his sons.

Hindu mythology is full of Vishwakarma's many architectural wonders. Through the four 'yugas', he had built several towns and palaces for the gods. In "Satya Yuga", he built the Swarg Loke, or heaven, the abode of the gods and demigods where Lord Indra rules. Vishwakarma then built the 'Sone ki Lanka' in "Treta yuga", the city of Dwarka in "Dwapar yuga", and Hastinapur and Indraprastha in the "Kali yuga".

Vishvakarma is attributed with the construction of the legendary cities in Hindu mythology as well as the divine weapons and chariots of the Gods. The jewelry worn by the gods were also fashioned by Vishvakarma. His creations include the palaces of Yama and Indra, as well as the underwater dwelling of Varuna, the Hindu god of the oceans. Vishvakarma also built the mythical city of Dwaraka , which was home to Lord Krishna and was submerged by the ocean after he departed the mortal world following the end of the Mahabharata war. Vishvakarma also built the cities of Hastinapur and Indraprashta, capital of the Kauravas and Pandavas respectively, the two warring parties in the Mahabharata.

Another legend relates Vishvakarma to the other great Hindu epic, the Ramayana. When Shiva wed Parvati, he bade Vishvakarma to build a palace worthy for them to reside. He built a magnificent golden palace on the island of Lanka , and to perform the grihapravesha, or house-warming ceremony, Shiva invited Ravana who was then a wise devotee of Lord Shiva. As recompense, Shiva offered anything that Ravana desired, and overwhelmed by the beauty of Vishvakarma’s architecture, he requested the palace itself. Obliged by the request, Shiva acceded and the golden palace became Ravana’s capital, setting the scene for the events of the Ramayana which was to unfold ages later.

The Markandeya Purana contains the story of Vishvakarma’s daughter Saranya who was married to Surya, the sun god, but unable to endure the heat and brilliance of the sun’s rays, requested her father to reduce their intensity. Vishvakarma then cut away an eighth part of the sun’s brilliance, and used fragments of the rays that fell to earth to build the discus of Vishnu, the trident of Shiva, the Vel of Muruga and other divine weapons for the devas. He also appears frequently in other Hindu scriptures and legends, where he is called upon to build palaces or weapons at the behest of the Gods.

Vishvakarma is said to have revealed the Sthapatya Veda, an upaveda (class of writings subordinate to the four main Vedas), which contains the science of mechanics and architecture. The work includes various treatises on the sixty-four traditionally recognized mechanical arts. Other Hindu manuals on architecture and sculpture are also attributed to Vishvakarma.

The Philosophy of Vishvakarma

Hindu philosophy associates Vishvakarma with Lord Brahma, the Hindu god of creation, because of his creative ability. The goddess Saraswati, consort of Brahma and the presiding deity of wisdom, knowledge and the arts, is also said to possess creative powers. Some see Vishvakarma as the implementer of God’s designs, the active creative aspect of Brahma. In the pantheistic Hindu religion that deifies various aspects of nature, Vishvakarma as the Celestial Architect is the personification of creative action in the universe.As the ‘all-maker,’ Vishvakarma, while representing the multiplicity of forms and forces in the material world, is also representative of the ultimate unity in the universe.

Indian artists and craftsman accept Vishvakarma as the founder of the various arts who endowed humans with the knowledge required for their work, and work to honor god through their labor. This spiritual association is very apparent in the arts and crafts of India , a relatively large portion of which are dedicated to the divine. The number of temples and shrines dedicated to the various deities in the Hindu pantheon far outnumbers the palaces and forts of the mortal kings of India . The prevailing principle in India regards that only those crafts and architecture that honor God were worthy of attention and acclaim.
Posted by Bharath.K