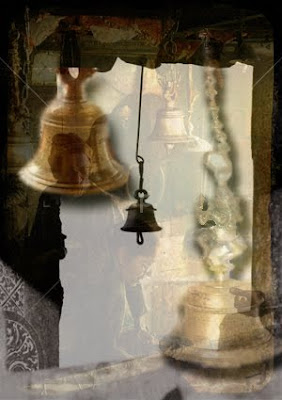 Why Do We Ring The Bell In A Temple?
Invariably in almost all Hindu temples there are one or more bells hung from the top near the entrance to the garbha griha. Hindus go to the temple to have "Darshan" (vision) of the Lord first before starting the worship or prayer. The purpose of Darshan is to establish communication between ones own "Aatman" (the divinity within you) and the "Paramaatman" (the Supreme Divinity). Darshan of the Lord is an essential and primary part of the Hindu faith, even before any form of worship is started. The devotee rings the bell as soon as he enters, thereafter proceeds to have Darshan of the Lord, following it with prayer or worship.
The Bell, known in Sanskrit as the Ghanta/Ghanti is used in all poojas for invoking the Gods.The ringing of the bell produces what is regarded as an auspicious sound. It produces the sound of "OM" the Universal name of the Lord. Most Mantraas (prayers) and vedic chants start with OM. All auspicious actions begin with OM. It fills the mind with peace, makes it focussed and replete with subtle sounds.. The ringing of the bell drowns any irrelevant or inauspicious sound, and pervades the whole atmosphere.This reminds us of all pervasive nature of the supreme (Sarva-vyaapi). Even while doing the ritualistic "Aarathi" the bell is rung. It is sometimes accompanied by conch blowing, beating drums, clashing of cymbals and other musical instruments. Hindus chant the following prayer while ringing the bell to start their daily worship.

According to the Skandpuran, the ringing of temple bells absolves man from sins committed over hundred births. Let us now see how the energy is emitted from the bell and what exactly happens with the help of a subtle drawing. 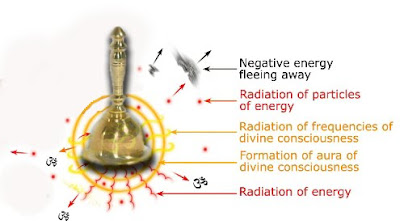 The dome shaped body of the bell and the clapper when strike with each other create circles of chaitanya which are projected in the atmosphere. The sound generated simultaneously also emits frequencies of chaitanya predominant in Akash tattva (absolute ether element). We can see them in yellow colour. The stroke of clapper emits red coloured divine energy rays. The particles of divine energy which spread in the atmosphere and are of red colour are also seen here. The divine energy and chaitanya generated by the sound of bell drives away the negative energies.

Means: I ring this bell indicating the invocation of divinity, So that virtuous and noble forces enter (my home and heart); And the demonic and evil forces from within and without, depart.