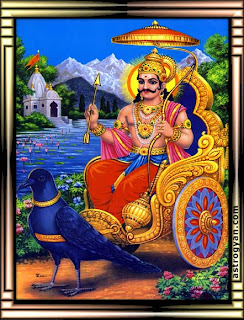 There are many gods in our Hindu religion but lord Shani dev is different from them. He has immense power, appeased toward off, evil eye etc. Saturday is the day which is devoted to Lord Shani Dev. Traditionally God Shani Dev is depicted in Hindu mythology as extremely dark wearing black clothes and mounted on a vulture.
Lord Shani Dev who is the son of Surya Dev (Sun) and Chhaya (Suvarna) is also known as one of the nine “Navagraha” by Hindu belief. Lord Shani Dev have a seventh place among these nine planets which govern our lives. Another name of Shani dev is Shanaiscarya, Asita, Saptarchi, Kruralochana, Pangu, etc. The birth place of Lord Shani Dev is Saurashtra, Gujarat . Hindu people believe that he is the god causing miseries in the life of a human being. So, Lord Shani Dev occupies the principal position among the Hindu’s God.
Lord Shani Dev is the brother of Yama Dev (deity of death) and is believed to be responsible for punishing or rewarding to the people one in the lifetime in accordance with their 'karma'. He has also a power of making a king into a pauper as well as changing the fortunes of a sufferer. Shani Dev is a great devotee of Lord Shiva because Lord Shiva is Guru of Shani Dev and hence those who wish to appease him pray to Lord Shiva along with him.


Story of Shanidev and Lord Shiva

Lord Shiva is the guru of God Shanidev. A short story about God Shiva and Shanidev shows us the power of Shanidev.

Story of Shanidev and Lord krishna

Kokilavan Dham” is the famous temple of Shanidev . This temple is situated at Kosi Kalan, near Mathura in Uttar Pradesh ( India ). It is believed that Kokilavan Dham is the place where Lord Shri Krishna gave darshan to Shani Dev. This temple is visited by many devotees on Saturday. There is an interesting story about Shani Dev and God Krishna.

When God Krishna was born all god visited to Nandgaon. God Shani was also one of them. Everyone was allowed to take Darshan of God Krishna but not Shanidev. When Shani dev was going to take Darshan of Krishna then Yashoda stopped him at the door and said,” You can’t see my baby because your name is fearful. If my baby sees you, he will be frightened.”
Hearing this Word of Yashoda, Shani Dev felt disappointed and went to nearby forest and started penance. After a short time God Krishna appeared before him in the forest and asked him, “What is the problem. Why you are in forest?” Shani dev replied, “O God! Please tell me one thing, when I am doing my duty to punish people according to their work (Karma). Then why people think about me that I am malignant and cruel. Why people think that Shani dev creates trouble only. Why do they avoid even my shadow? Today also when all god could enjoy the bliss of your Darshan, I am denied that right and benediction."
God Krishna advised Shanidev to stay put near Nandanvan. He also granted him the boon that whoever came to his temple to pray would immediately be freed from all worries and afflictions.
At last, God Krishna visited the temple and began playing the divine flute. Hearing the sound of flute, the Gopis arrived but Krishna turned himself in the form of a Cuckoo (Koyal in Hindi).
That place of the forest where Krishna appeared before Shanidev, has since been called “Kokilavan”. Now it is famous for “Kokilavan Shanidham”.

Story of Shanidev and Lord Hanuman

As per Hindu Epic Ramayana, When Hanuman went to the Lanka in search of Sita mata (Wife of Lord Rama). After meeting with Sita mata, when Hanumanji was coming back, he met with many God who were in clutch of Rakshash (Evil) King Ravan. God Shanidev was also there. Hanumanji helped freeing shanidev and getting out of Lanka.
Because of Hanumanji helped Shanidev they both became friends. Here, Shanidev Promised to Hanuman that anyone who prayed to him (Hanuman), he would be rescued from the baleful effects of Shanidev.

Other story of Shanidev and Hanumanji:

God Surya Dev is the Father of Shanidev. Surya dev is also the Guru (Teacher) of Hanumanji. After the completion of course, Surya dev said to Hanuman, “You have become adept in all forms of wisdom and weapons, now go to your mother Anjani” But Hanumanji requested to Surya dev “Give me an opportunity to repay for your tutelage” Suryadev said to Hanuman, “my wayward son shani is the cause of my sorrow only, Go and bring that wayward son of mine back to me”. Listening to the order of Surya dev, Hanuman went to Shanilok. When he was going to shanilok many planets tried to stop him but they were unable.
When Shanidev saw hanuman he asked to him, “Who are you? Why are you come here? Do you not fear with die?” Hanumanji replied, “I am Hanuman, The disciple of Lord Surya. Lord Shani you have all power & virtues, but your greatest drawback is disobeying your father. It’s not good & it’s the greatest sin. I have come here to take you to your father.” Hearing all this Shani became angry & said, “You don’t know my power, Powerful god also trembled with my power so better thing for you go back immediately otherwise I will burn you” Hanuman replied, “I have not came here to go back”. Then Shani Dev crooked gaze on Hanuman but shanidev could not burn him so, Shanidev sat on his head. They were inside a room. Immediately Hanuman increased his size because of which shani pressed between hanuman and the ceiling. When the pain was unbearable, Shani requested to God Hanuman to release him. When shanidev became free from Hanuman then shanidev Promised to Hanuman, “Anyone who will worship you on Saturday, I will never be terminate them.” After that shanidev & hanumanji went to Suryadev. Shanidev became happy to see them.

Story of Shanidev and King Vikramaditya