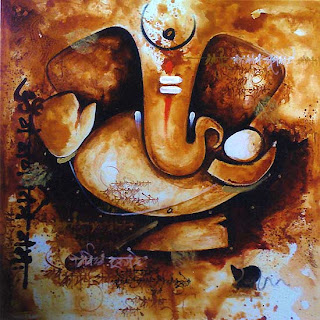 Lord Ganapathi is the elder son of Lord Shiva and Goddess Parvati, the universe's divine couple. He is the chief (Isa) of Lord Shiva's army and attendants, hence the name Ganesha. In the name Ganapathi , Ga denotes "knowledge," na means "salvation," and pati means "lord." He is known for removing all of the obstacles(vignas) in the path of progress and wellbeing of his devotees, therefore he is known as Vigneshwara.
Myths about Lord Ganesha
When Goddess Gauri (wife of Lord Shiva) once, while bathing, created Ganesha as a pure white being out of the mud of Her Body and placed Him at the entrance of the house. She told Him not to allow anyone to enter while she went inside for a bath. Lord Shiva Himself was returning home quite thirsty and was stopped by Ganesha at the gate. Shiva became angry and cut off Ganesha's head as He thought Ganesha was an outsider. When Gauri came to know of this she was sorely grieved. To console her grief Shiva ordered His aids to cut off and bring to Him the head of any creature that might be sleeping with its head facing north. The servants went on their mission and found only an elephant in that position. The sacrifice was thus made and the elephant's head was brought before Shiva. The Lord then joined the elephant's head onto the body of Ganesha.
Lord Shiva then made His son worthy of worship at the beginning of all undertakings, marriages, expeditions, studies, etc. He intended that the annual worship of Ganesha should take place on the 4th day of the bright half of Bhadnpada. Without the Grace of Sri Ganesha and His help nothing whatsoever can be achieved. No action can be undertaken without His support, Grace or blessing. 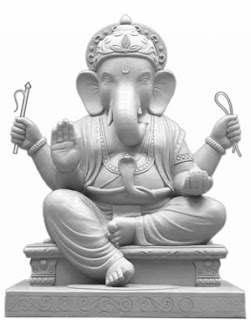 Why Hindus offer prayers to Sri Ganesh before a special occasion ?
In Shivpuran, a story narrates that once all the gods went to Lord Shankar to inquire as to who should be the chief amongst them. In response, Lord Shankar proposed that whoever went around the world thrice and returned to Mount Kailash first would be the most revered of all and declared as the foremost amongst gods.
Sri Ganesh’s mode of transport was a mouse. Surely it was too slow to undertake the journey. Using his ingenuity, Sri Ganesh went around his father Lord Shankar and mother Devi Paravati thrice. With folded hands, he then stood humbly before them. His silence and humility indicated that he had completed his mission. Delighted at His son’s ingenuity, Lord Shankar smilingly told him that none could be as clever and crafty as he was. By going around his parents thrice he had achieved more than he could by going around the world three times.
Pleased, Lord Shankar blessed Sri Ganesha and declared that whoever offered prayers to him before a ceremony or an auspicious occasion would never face obstacles. Since then all mankind has been offering prayers to Sri Ganesha before an auspicious occasion.

Why we offer grass (durva) to Lord Ganesha?
At one time a ruthless demon named Anlasur created havoc around the world. Even the gods in heaven were not spared. He would swallow saints, sages and innocent people alive. There were terror all around. The chief of gods, Indra, tried to control Anlasur several times by engaging him in battle. However, there was no respite. Anlasur was beyond Indra’s control.
Panic stricken by Anlasur’s terror, all the gods went to Lord Shankar for help. He revealed that only Sri Ganesha could help them. Sri Ganesh was pot-bellied and could swallow Anlasur. There was enough space in his belly to accommodate the demon.
The gods offered prayers and pleased Sri Ganesh, who agreed to help them. He chased Anlasur, caught and swallowed him whole. But this created a great burning sensation in Sri Ganesh’s stomach. Many remedies were tried. None worked. Sri Ganesh was in great agony. When sage Kashyap heard of Sri Ganesh’s plight, he went to Mt Kailash, collected 21 stems of of durva grass, and offered them. The moment Sri Ganesh ate this grass the burning vanished.
Since that time devotees are offering durva to Lord Ganesh. 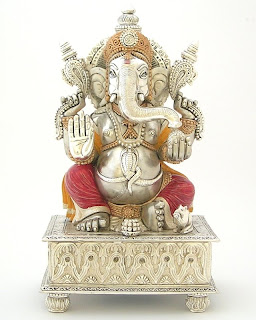 Right-sided trunk: An idol of Ganapati with the trunk curved towards the right is called dakshinmurti or dakshi­nabhimukhi murti (the idol facing the south). Dakshin means the southern direction or the right side. The southern direction leads to the region of Lord Yama (Yamalok), the deity of death while the right side belongs to the Surya nadi (Sun channel). One who is able to face the direction of the region of Yama is powerful. So also, one with an activated Surya nadi is also radiant. Thus in both senses, the Ganapati idol with the trunk curved towards the right is said to be ‘active (jagrut)’.
One feels repulsed by the south direction because it is in that direction that scrutiny of one’s sins and merits is carried out after death, in the region of Lord Yama. Scrutiny akin to that done in the south after death, begins when alive if one faces the south or sleeps with the legs directed towards the south. The dakshinabhimukhi idol is not worshipped ritualistically in the usual manner because tiryak (raja) frequencies are emitted from the south. The ritualistic worship of this idol is performed by observing all the norms of ritualistic worship meticulously. Consequently the sattva component is augmented and one is not distressed by the raja frequencies coming from the south.

Left-sided trunk: An idol of Ganapati with the trunk curved towards the left is called Vamamukhi. Vam means the northern direction or the left side. The Chandra nadi (Moon channel) is situated to the left. It bestows tranquility. Besides, since the northern direction is spiritually favourable and bestows Bliss (Anand), mostly the Vamamukhi Ganapati is worshipped. It is worshipped ritualistically in the usual manner.
Posted by Bharath.K