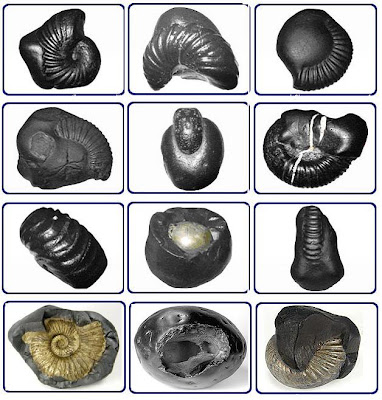 " PUJITO’HAM NA TAIR MARTYAIR NAMITO’HAM NA TAIR NARAH
NAKRTAM MARTYA LOKE YAIH SALAGRAM SILARCANAM "
Lord Shiva speaks to his son, Skanda - in this mortal world, if anyone does not worship Shalagram Shila, I do not not at all accept any of their worship and obeisances.
The Shaligrams are specifically described as fossil-stones which have taken shape in the Gandaki-river, and are characterized by the presence of discus marks. Shaligrams are always naturally found in the river Gandaki. These also include the famous Kali-Gandaki River , Muktinath, Damodar Himal, Damodar Kunda, Devghat, etc.
Shaligrams are sacred 'shilas' or stones representing the abstract form of Lord Vishnu. His followers, the Hindu Vaishnavas, place these stones in their puja altars for daily worship. Just as the abstract form of Shiva is the stone ‘lingam’ which the Shaivites worship in their temples and homes, so is the ‘shila’ of Lord Vishnu.
According to Hindu tradition, the Shaligram stone is the shelter for a small insect known as the 'vajra-keeta' that cuts through this stone and lives inside it. In actuality, however, these stones are the fossils of the common ammonite that lived millions of years ago when the Himalayan mountain range formed the bed of a vast ocean floor.
Characteristics of Shaligrams
The marks made by the shell of the ammonite give a Shaligram its characteristic appearance, with the pattern often resembling and representing the 'Sudarshan Chakra' or the discus with a sharp-toothed edge which rests on the index finger of Lord Vishnu. Shaligram stones come in dfferent colors such as red, blue, yellow, green and black. Of these, the yellow, blue and black varieties are considered more sacred. The yellow and golden-colored Shaligrams are considered most auspicious and are believed to bestow great wealth and prosperity on its worshippers.
Shaligrams of different shapes are often associated with the different ‘avtars’ or incarnations of Lord Vishnu such as: Matsaya avtar, Kurma avtar, Narasimha avtar and so on. In the epic Mahabharata, Lord Krishna while giving a discourse to Yudhistra refers to the qualities of Shaligrams.
The Vaishnavas believe that a Shaligram is the dwelling place of Lord Vishnu and any one who owns it must worship it daily. He must also adhere to strict rules while handling a Shaligram. He must not touch it without bathing, never place it on the ground, avoid intake of non-Vaishnavite food and should not indulge in bad habits or practices.
All Shaligrams are considered auspicious: some are very sacred, others are considered to bring good luck, good fortune, peace and happiness, spiritual enlightenment and so on. Individual worshippers can choose the Shaligram that will bring them the most beneficial effects based on the positioning of the planets in their horoscopes. Temples can, however, use any kind of Shaligram in their prayers and rituals.
THE VIRTUES OF SHALIGRAM:
Wherever Shaligram is kept Lord Vishnu lives there along with Goddess Laxmi. The umbrella shape Shaligram has power to give kingdom and the one having elliptical shape gives lots of wealth. Shaligram purifies a person and gives success in all walks of life. The benefits that one get by reading all the Vedas and doing penace (tapasya) is obtained by a person who worships Shaligram. The one who does Abhishek of Shaligram with water gets lots of benefits and happiness. It is said that if a dying person is given the water of Shaligram then he is purified from all the sins committed by him and goes to Vishnu Lok and get Nirvan. 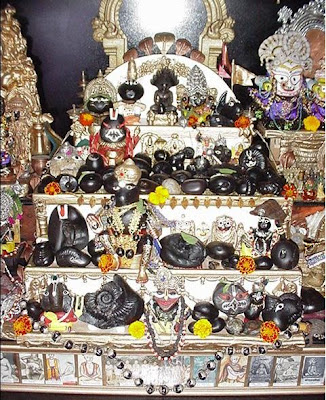 POOJAN VIDHI: Shaligram is worshipped like one worships Lord Vishnu. Normally tulsi is used essentially and also a counch shell (Shankh) is also kept near the Shaligram. Daily worship with purity of heart and body is required to get full benefits from Shaligram. (Ref.: Shrimaddevi Bhagwat).
To perform puja of the Shaligram which you have selected to install in your altar of worship, you will need the following 'samagri' or ingredients:
Ganga Jal, Panchgavya (a mixture of 5 auspicious articles that include: Cowdung, Cow's urine, Milk, Ghee and Curd), fresh Tulsi leaves, Kusha grass, Pipal leaves, Incense sticks, Camphor, Sandal paste, Lamp burner, and a conch shell. You may substitute any item that is not available with uncooked rice.
Offerings to the Shaligram can be of Milk, Fruits, Flowers, Sweet dishes or a Coconut.
Procedure To Be Followed For The Puja
1. Sit in a position in which you can face the East or North-East direction.
2. Wash the Shaligram with Ganga Jal poured from the conch shell. Then wash it again with punchgavya, and then wash it once more with Ganga Jal.
3. Place some kusha grass in a stainless steel glass filled with water to sprinkle over the Shaligram.
4. Now, put the Shaligram on some pipal leaves placed on a plate. Light the camphor, incense sticks and the lamp filled with ghee.
5. Apply some sandal paste on the Shaligram and place some fresh tulsi leaves in front of the Shila.
6. Light the lamp and move it in a circular, clockwise movement of the hand in front of the Shaligram.
7. Chant the mantra: "Hare Krishna, Hare Krishna, Krishna Krishna, Hare Hare" nine times.
8. Offer milk, fruits or sweets to the Shaligram. Offer some money and then give that money to a poor person.

Note: If you are worshiping more than one Shaligram, make sure they are in even numbers. This means you should have either two, four or six Shaligrams. Place a tulsi mala around them or offer fresh tulsi leaves every where. It is important to remember that even the water that has touched the Shaligram becomes 'amrit' (holy water), while you are bathing it, has tremendous properties. If you drink this water, it can help bring relief from various physical ailments and poor health so you can lead a more healthy life. 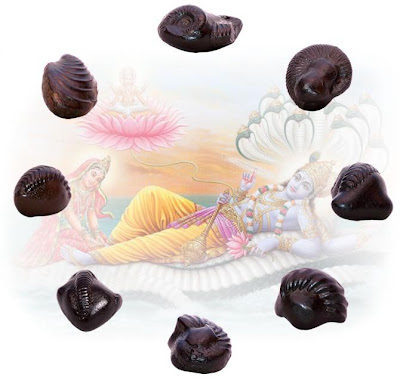 " YE PIVANTI NARA NITYAN SALAGRAMA SILA JALAM
PANCA GAVYA SAHASRAIS TU SEVITAIH KIM PRAYOJANAM "
- HARI BHAKTI VILASA 9/20 FROM PADMA PURANA
Any persopn who has drank the water which has bathed shalagram shila. That is equivalent to drinking thousand and thousands of times pancagavya.(Pancagavya is made from five auspicious products of a cow offered to the Lord)
Posted by Bharath.K