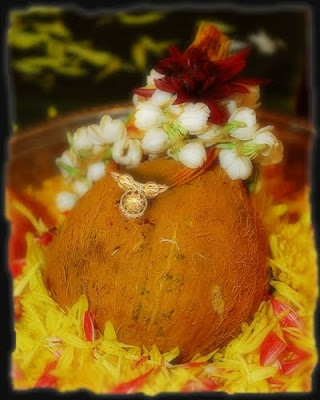 The Sacred Symbol of Marriage..
Mangal = auspicious
Sutra = thread
A mangalsutra (also mangala sutra or mangalasutra) is an Indian symbol of Hindu marriage, consisting of a gold ornament strung from a yellow thread, a string of black beads or a gold chain.

The word mangalsutra can be deciphered as 'sacred thread or cord'; as 'mangal' means auspicious and 'sutra' means thread or cord.

In South India, the Maangalyam is made up of a yellow thread painted with Turmeric paste. The thread is tied with three knots around the bride’s neck. In some of the weddings the first knot is tied by the groom, while the remaining two knots are tied by his sister. In North India the Mangalsutra is a golden ornament having black beads and a gold or Diamond pendant in it.

Mangalsutra is Lord Brahma. Mangalsutra. That is to say Thali is both creator and destroyer. When tied to a girl’s neck, thali promotes her to wifehood and when removed from her neck it demotes her to widowhood.

It is called mangal sutra, because it represents “auspiciousness”. By wearing it, a woman announces that she is happy and fulfilled in her life, this is what makes her “auspicious”. The sutra represents the many strands of emotions, love, faith, trust, friendship etc that go into making up a relationship, especially one that is suppose to last a life time. It also represents the many relationships that bind them now, those of the two families that are now woven into one.

"Historically, the custom of tying a mangalsutra, the auspicious emblem or cord, on the wedding day, appears to have become popular only after the 6th century AD. Before this, a yellow protective cord known as 'kankanabandhana' was tied around the wrists of the bride and the groom to signal their commitment to marriage.

The mangalsutra is considered a talisman to ward off the evil eye. The black colour of the beads is said to absorb all negative vibrations before they can reach the bride and her family. The stringing together of the beads into one thread has its significance as well. Just as each bead contributes to making a beautiful necklace, so does the woman have to blend and integrate into the new family after marriage."

According to Hindu culture, there are five signs of marital status of women. They are mangalsutra, Toe rings, Kumkum, bangles and a nose ring. Mangalsutra is the most important among them.

The Mangalsutra consists of two pieces, ONE FROM EACH FAMILY, traditionally dangling on a yellow thread. The variations in the Mangalsutra and the way it is made / arranged varies from region to region. It contains images of the Shiva Lingam - Iyers The Namam and Sudarshana Chakra - Iyengars A pair of shell (shakha) and red coral (paula) bangles - Bengali Ivory -Punjab and Rajastan Gold chain with black beads and a gold pendant - West and other parts of India. Kashitali - gold chain with coral beads and two black beads on either side of a diamond shaped gold pendant - Karnataka, specifically "Konkini" Soft 24 Karat Gold is fashioned into necklaces modelled on the local flora and fauna—earrings like the hona, which replicate the orchid, and the lokaparo, which consists of two birds placed back to back. - Assam Gold is used to craft imitations of the human head and long funnel-shaped beads which are used in combination with shells, animal claws and teeth and precious and semi-precious stones. - Nagaland Rice grains, the Cobra’s hood, Melon and Cucumber seeds are some of the common motifs of nature inspired jewellery. - Tamil Nadu and Kerala. Silversmiths craft large ornaments, which have a very delicate and intricate appearance. Headdresses called chak, long earrings and large nose rings with papal leaf or bird motifs are the specialties of the region. - Himachal Pradesh Turquoise, Cornelian (sort of reddish quartz), Coral and Agate - Ladakh and East Indian States Our humble Mangalsutra had a very humble Beginning. 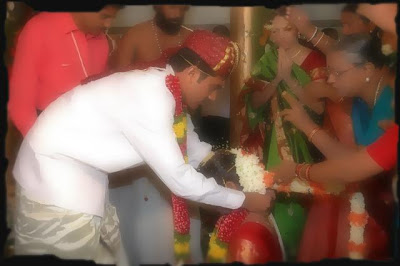 A Hindu marriage symbolizes not just a bonding of two individuals but also the bonding of understanding, commitment, mutual love and spiritual growth. In Hindu tradition marriage is not just about celebration and fun it demands sacrifice, companionship, dedication, and surrender by both the partners. Each and every rituals and customs associated with marriage portrays the real essence of wedding. Mangalsutra is one such symbol of marriage. It is not just a jewelry item it has lots of significance to an Indian married woman. It is a sacred thread of love and goodwill worn by married women as a symbol of their marriage.
Mangalsutra is the guardian of the wearer; a sort of fence as the South Indian saying goes. To every woman Mangalsutra is precious, as precious as her loving husband. Temple goers invariably touch their Mangalsutra with the Kumkum offered by poojaris as prasad.

Married women who value their Mangalsutra perform ‘Sumangali pooja’ for strengthening the life span of their Mangalsutra. When they prostrate before elders to receive their blessings and good wishes, they are blessed with the words ‘Deerga Sumangali Bhava’, meaning ‘Let you lead a long married life’, which only tells indirectly ‘Let your husband be hale and hearty forever so as to make you happy’.
Posted by Bharath.K