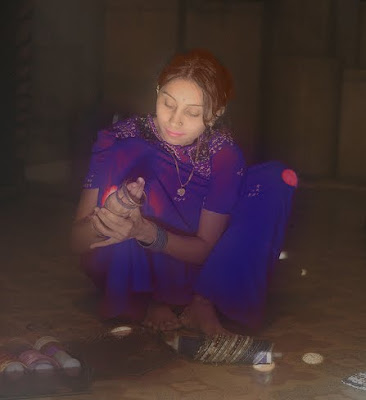 Bangles are a type of ornament worn by women in India. Also called Kangan or Chudi in Hindi, Valayal in Tamil, Gaaju in Telugu, Bale in Kannada. Bangles are part of traditional Indian jewelry. In India, bangles are very popular and with growing fashion trends, have become a highly popular in their various designs and forms. They are usually worn in pairs by women, one or more on each arm. Most Indian women prefer wearing either gold or glass bangles or combination of both. Inexpensive Bangles made from plastic are slowly replacing those made by glass, but the ones made of glass are still preferred at traditional occasions such as marriages and on festivals. Bangles hold great value in Hinduism and tradition. It is considered inauspicious for a woman to have bare arms. Traditionally, married Hindu women always weary bangles around their wrists. Today, the modern day women may not wear bangles with their daily attire, but only on occasions and festivals. This is because to them, bangles have a very sentimental value. In fact, to the Hindu woman, bangle is not only an ornament, but also an important part of womanhood and honor.

A single bangle worn by a man is called a Kada or Kara (steel or iron bangle). Kada is a circular shaped bangle having religious significance for Sikhs, and is made from iron, white metal or gold.

Marriage - While girls in traditional Indian society are allowed to wear bangles, married women are generally expected to wear bangles. The jewelry is primarily associated with matrimony, signifying marriage in the same way that the Western wedding ring does. After the wedding, the woman continues to wear her bangles as a charm of safety and luck for her husband, and after a Hindu woman's husband dies, she breaks her glass wedding bangles in an act of mourning.

Bangles and Honeymoon – During an Indian wedding, the bride tries to wear the smallest glass bangles. She is helped by her best friend or sister to do this using scented oil. It’s believed that smaller bangles symbolize a happy and loving marriage and a wonderful honeymoon.

Bangles and Husband and Luck – A married Indian woman is required to wear bangles (green or red depending on which region they belong to) on a day to day basis because bangles are symbolic of safety, marriage and luck for their husbands. Sudden breaking of glass bangles is considered a sign of danger or an unpleasant incident involving the husband. 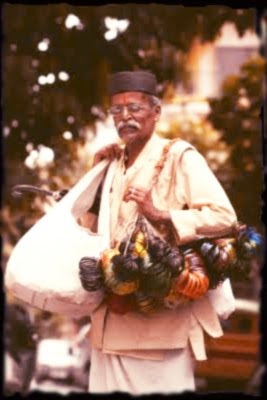 In Gujarat and Rajasthan, the bride’s mother has to gift the bride a pair of ivory bangles. It is only on wearing these ivory bangles that the bridal couple can perform the ‘saptapati’; without the bangles, this ritual cannot be performed. (The saptapati is the seven steps that are taken around the fire, without which no Hindu marriage is considered complete).

Married women in Bengal have to wear the iron ‘kada’ (bangle) or ‘loha’ as it is commonly called, to signify marriage. In addition to this kada, the bride is presented with white conch bangles that are beautifully crafted and red lac bangles. 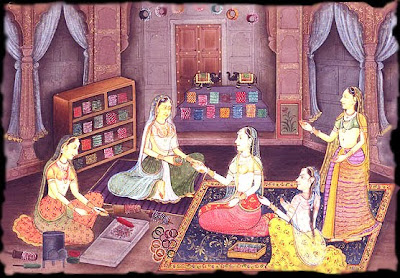 The South Indian ceremony called Valaikaapu occurs during the seventh month of a woman's pregnancy. The family celebrates, and bangles of all colors and designs are stacked on the woman's wrists. Once the ceremony is completed, the woman goes to her mother's residence. There, she will deliver her child.
It is believed to be an event held to ward off evil spirits that might be lurking around the mother-to-be or the baby in the womb.
Posted by Bharath.K