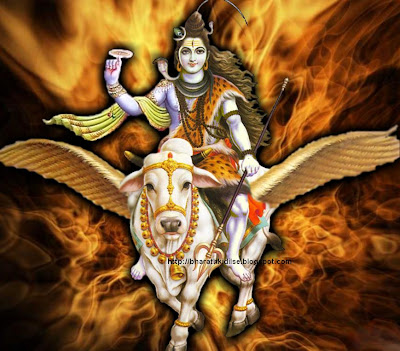 " Shiva and Vishnu are the same "
"sivasya hridayam vishnuh,vishnOscha hridayam shivah "
"yathA shivamayO vishnurEvam vishnumaya shivah" .
- Skandopanishad
"Shiva is a form of Vishnu and Vishnu a form of Shiva. Shiva dwells in the heart of Vishnu while Vishnu in the heart of shiva."
Harihara is the name of a combined deity form of both Vishnu (Hari) and Shiva (Hara) from the Hindu tradition. Also known as Shankaranarayana ("Shankara" is Shiva, and "Narayana" is Vishnu), Harihara is thus worshipped by both Vaishnavites and Shaivities as a form of the Supreme God, as well as being a figure of worship for other Hindu traditions in general. Harihara is also sometimes used as a philosophical term to denote the unity of Vishnu and Shiva as different aspects of the same Supreme God.
ये अपि अन्य देवता भक्ताः यजन्ते श्रध्दयान्विताः
ते अपि मामेव कौन्तेय यजन्त्यविधिपूर्वकम
- Bhagavad Gita (Chp 9, 23)
Krishna tells Arjuna that even those who are the devotees (bhaktaas) of other devataas (anya devataa) and who worship them with great devotion they too are worshipping Him – even if it is considered to be avidhipoorvakam (i.e. following a different “vidhi”, or pooja rituals). Krishna is saying, “Pray to Me directly. But, if the devotee finds attachment to other deities, that is OK. They too worship Me.”
Vishnu-maaya

Naarada, coming under Vishnu maaya, gives shaapam to Vishnu, Naarada says “Svaami! Please forgive Me. I, coming under influence of Your maaya, got ahankaar and did Your ninda. Please tell Me what can save Me from this ghora-paapam”.

Vishnu says:“O Priya Naarada! You go and do paaraayana of Shankara Shatanaamams. Then You will get Shaanti. Shiva is whom I respect the most. Even by mistake dont forget this. One who doesnt have Shiva-anugraham cannot be My Bhakta. Believe this … Then My maaya wont affect you.”

One day, when Lakshmi and Vishnu were together in vihaaram, Lakshmi sees Ucchaishravam, her brother, the horse of Revanta who is the son of Surya. Engrossed in seeing her brother, she does not reply to the repeated calls of Vishnu. Seeing her attraction, Vishnu gives her shaapam to go to Bhulokam in the form of a horse and come back to Vaikuntam only after getting a son equal to Himself! She comes to Bhuloka to experience the shaapam and realizing that none other than her brother, Shiva can help her calm Vishnu, she immediately does a tapas for Him and Shiva appears to save her soodari. Lakshmi says “You and Vishnu are both same, the Paramaatma. Please help me!”. Shiva says “Soodari! How do you know that we both are same? All learned people know that. Who told you?”. Lakshmi says, “Once Mahavishnu Himself told me this. Seeing Him in deep Daiva-dhyaanam, I asked Him “During Samudramanthanam, I thought you were the greatest of all and hence chose you. Devaadideva! Who is better than you that you are in dhyaanam of Him?”. Mahavishnu replied “I am doing Shankara-dhyaanam. He is Eshwara. He is the same as Me. All learned people know that. If someone is my devotee but still hates Shiva, he will fall into naraka”. Saying this, She asks Shiva to pursuade Vishnu to bless Her with a child. Shiva sends Chitrarupa as a duta to convince Vishnu. Vishnu immediately accepts and comes to Bhuloka and blesses Lakshmi with Ekaveera, who is equal to Vishnu Himself.

The devas had looked upon the earth, and were horrified by the terrible state it was in- everywhere there was greed, war and unhappiness. Vice and sin ran rampant among people. Confused as to how things could have become like this, they approached Vishnu to seek answers. Vishnu said to them as they assembled, "Let us go to Shankar, for He is wise!" Vishnu led the demigods up the icy slopes of Mount Kailash, but saw no one there. Amidst the rocks and snow, there was no sign of Shiva or Parvati, or even Nandi. The baffled gods searched for a sign of Shiva until Vishnu came to them and said, "My beloved, your selfishness has made you blind, for Hara is here! You must purify yourselves- bathe in milk, sing the Satarudriya hymn, and take only hot milk for 3 days, and your eyes will be opened." They followed his instructions, but after 3 days they still could see no sign of Shiva. They cried out, "O Jagannath, Lord of the World, where can we find Shankar?" At that, Vishnu pointed to his chest. "He is in me, as I am in him. Can't you see that?" As he spoke, he revealed his lotus heart, and as the petals opened, the sacred Lingam could be seen in the middle. The gods fervently worshipped the lingam, bathing it in milk, covering it with vermillion and sandalpaste, offering flowers and chanting the 1008 names of Shiva. But through this, they were still disturbed- How could Hari and Hara be one and the same? Vishnu had light, Sattvic qualities, while Shiva had dark, tamasic qualities. They were so different! But knowing their thoughts, Vishnu took on the form of Shiva. The gods could no longer tell the difference between the trident-bearing, three eyed god, or the conch bearing lord. And so, realizing finally that Vishnu and Shiva were one and the same, they bowed in devotion and worshipped Sri Hari Hara.
Posted by Bharath.K