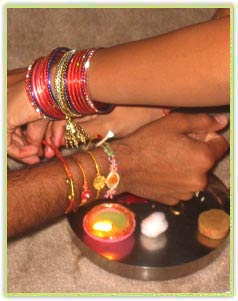 Raksha Bandhan (the bond of protection in Hindi) is a Hindu festival, which celebrates the relationship between brothers and sisters. It is celebrated on the full moon of the month of Shraavana.
The festival is marked by the tying of a rakhi, or holy thread by the sister on the wrist of her brother. The elder brother in return offers a gift to his sister and vows to look after her same while an elder sister returns offers to her younger brother. The brother and sister traditionally feed each other sweets. It is not necessary that the rakhi can be given only to a brother by birth; any male can be "adopted" as a brother by tying a rakhi on the person, that is "blood brothers and sisters", whether they are cousins or a good friend.
According to ancient traditions, it is customary to have protection threads that are charged with sacred verses (Mantras) and sanctified with rice, durva grass etc.; to have these tied by people who know the Vedas or by near and dear ones. This protection thread saves from sins on the one hand and removes diseases on the other hand. By tying this thread, protection is afforded for a full one year and all kinds of fears are removed.
Nowadays Rakhis are decorated with soft silky threads of various colours, and also with ornaments, pictures, gold and silver threads etc. These Rakhis enhance the artistry of the people. Within these Rakhis reside sacred feelings and well wishes. It is also a great sacred verse of unity. Acting as a symbol of life's advancement and a leading messenger of togetherness.
History
Vritra-Indra
The origin of this festival is usually traced back to the historical incidents of Indra's fight with Vritra-Indra that resulted in Indra's loss. Then, his wife had tied a thread around his wrist and empowered it with divine powers to make sure Indra emerged victorious in the duel that followed.
Krishna and Draupadi 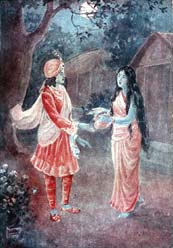 Another incident is the one that concerns Krishna and Draupadi, the wife of the Pandavas. She had torn a strip of silk off her sari and tied it around Krishna's wrist to stop the flow of blood Krishna was so touched by her action that he found himself bound to her by love. He promised to repay the debt and then spent the next 25 years doing just that. Draupadi in spite of being married to 5 great warriors and being a daughter of a powerful monarch only trusted and depended wholly on Krishna.
Krishna repaid the debt of love during Vastra haran of Draupadi. Draupadi's Vastra Haran was done in the assembly of King Dritrashtra,when Yudishter her husband lost her in gamble. At that time Krishna gave her saree (extender her saree) to save her.This is how He paid his debt towards rakhi tied to him by Draupadi.
King Bali and Goddess Laxmi
According to another legend the Demon King Bali was a great devotee of Lord Vishnu. Lord Vishnu had taken up the task to guard his kingdom leaving his own abode in Vaikunth. Goddess Lakshmi wished to be with her lord back in her abode. She went to Bali disguised as a Brahmin woman to seek refuge till her husband came back.
During the Shravan Purnima celebrations, Lakshmi tied the sacred thread to the King. Upon being asked she revealed who she was and why she was there. The king was touched by her goodwill for his family and her purpose and requested the Lord to accompany her. He sacrificed all he had for the Lord and his devoted wife.
Thus the festival is also called Baleva that is Bali Raja's devotion to the Lord. It is said that since then it has been a tradition to invite sisters in Shravan Purnima for the thread tying ceremony or the Raksha Bandhan.
Yama and the Yamuna
According to another legend, Raksha Bandhan was a ritual followed by Lord Yama (the Lord of Death) and his sister Yamuna. Yamuna tied rakhi to Yama and bestowed immortality. Yama was so moved by the serenity of the occasion that he declared that whoever gets a rakhi tied from his sister and promised her protection will become immortal.
Rani Karnawati and Emperor Humayun
The story of Rani Karnavati and Emperor Humayun is the most significant evidence in the history. During the medieval era, Rajputs were fighting Muslim invasions. Rakhi at that time meant a spiritual binding and protection of sisters was foremost. When Rani Karnawati the widowed queen of the king of Chittor realised that she could in no way defend the invasion of the Sultan of Gujarat, Bahadur Shah, she sent a rakhi to Emperor Humayun. The Emperor touched by the gesture started off with his troops without wasting any time.
Alexander The Great and King Puru
The oldest reference to the festival of rakhi goes back to 300 B.C. at the time when Alexander invaded India. It is said that the great conqueror, King Alexander of Macedonia was shaken by the fury of the Indian king Puru in his first attempt. Upset by this, Alexander's wife, who had heard of the Rakhi festival, approached King Puru. King Puru accepted her as his sister and when the opportunity came during the war, he refrained from Alexander.
An insight of Rakhi Rituals 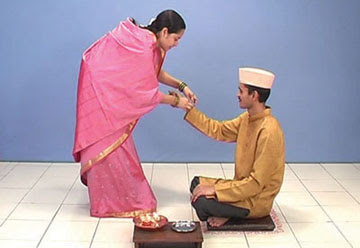