In Hinduism, each day in a week is dedicated to a particular god in the Hindu pantheon. Thursday, which is Brihaspatiwar or Vrihaspativar, is dedicated to Vishnu and Brihaspati, the Guru of Devas. Thurdsay is also popularly known as Gurubar or Guruvar. Yellow is the color of the day. A fast is observed on the day and food is consumed only once.

There are numerous stories associated with the reason for observing Upvaas, or fast, on Brihaspativar. Many of the stories are part of local folklore and stories vary from region to region.

Almost all stories suggest that those who perform pujas and Vrats on Thursdays will be blessed with wealth and happy life. 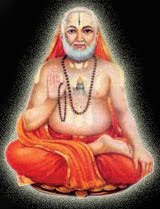 In some regions, banana or plantain is worshipped and watered. In South canara, the day is dedicated to Lord Ragavendra Swamy.
Lord Brihaspati 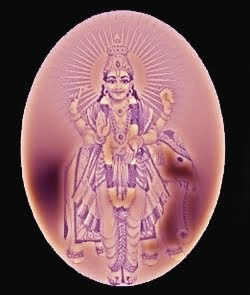 In the solar system, Guru, Brihaspathi or Jupiter as his popularly known occupies the second largest position after the Sun. Jupiter is revered as celestial preceptor of the Gods. Worship of Bhraspati or Guru (JUPITER) Devata results in a cure from ailments affecting the stomach and helps one to ward off his/her sins, helps him/her in gaining strength, valor, longevity etc. He grants the boon of father-hood to the childless, good education. Thursdays are considered to be the best day for the worship of Jupiter. Following is the katha(story) which is recited by the devotee, who is fasting and praying to Bhraspati Dev on Thursdays.

Once Lord Indra, surrounded by many gods, Rishis, Kinnaras and Gondharvas sat on his throne in a proud mood. As guru Bhraspati reached there all of them except Indra stood up to pay respect. India used to pay obedience to his guru regularly but he showed discourtesy at that time. Bhraspati felt bad and left his palace. As Bhraspati left the palace Lord Indra realised his mistake and repented over his action. He felt that all his luxurious possessions were due to his guru blessings. Guru anger will turn it to dust.Indra decided to go to Bhraspati and tender apology for his action. It may pacify his anger. He went to Bhraspati.
Bhraspati intuited that Indra was coming to his Ashram. He avoided meeting out of anger and disappeared immediately. Lord Indra returned home disappointed. A demon god Vrishvarsha, sensed this situation and went to his guru Shukracharya. He begged his gum permission to attack Indrapuri, the kingdom of Lord India in those circumstances. Shukracharya permitted him. The demon god surrounded Indrapuri and made a sudden attack. In the absence of Guru Bhraspati blessings the gods lost all battles one after the other.

After his defeat the gods went to Lord Brahma and related the whole story. He begged for safety and asked for some strategy. Lord Brahma said, You have not done good by disgracing Bhraspati. Anyway go to Vishwaroopa the learned son of Twashta. Request him to become your priest. His blessings can save you. They went to Twashta and sought his blessings. Twashta said, By becoming your priest I do not want to lessen my virtues. But you go to my son Vishwaroopa. He will oblige you by accepting your request for priesthood.

All the gods went to Vishwaroopa and requested him to become their family priest for performing Yajna. He accepted their request. By Vishwaroopa grace demon Vrishvarsha was defeated and Lord India regained his kingdom. Lord India was happy. He implored Vishwaroopa to perform a special yajna for further gains. Vishwaroopa agreed. Vishwaroopa had three mouths. With one mouth he sucked the juice of Sompalli a special creeper. From the second mouth he used to drink wine. He used his third mouth for eating meals. 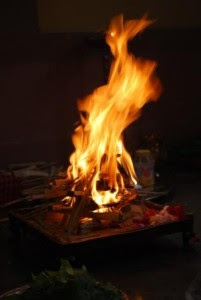 Vishwaroopa started performing Yajna. The demon gods were frightened. They thought a plan to undo the Yajna effects. One of the demon god went to Vishwaroopa and implored, Honourable Sir, do you know that you belong to demon genealogy from your mother side. Your mother is the daughter of a demon god. While performing Yajna kindly make some offerings in the names of demon gods for their happiness. Vishwaroopa agreed to his request. He made some silent offerings to demon gods so that no one may hear it. The result was that the Yajna advantages were divided between dieties and demon gods.When Lord Indra came to know the treachery he beheaded Vishwaroopa in a state of extreme anger. One of his mouth from which he took wine, turned into a black bee. The second which he used for sucking Sompalli juice became a piglion while the third one used for taking meals was transformed into a partridge.

Lord Indras body was immediately deformed due to sacrelige, the murder of a Brahman. All the gods made repentance for one year but it had no effect on India . They approached Lord Brahma for seeking some remedy to redeem India from the sacrelige. Lord Brahma accompanied by Bhraspati went to Indra. He decided the sacrelige act into four parts.The first part was given to the earth. As a result the earth became uneven. Some of its portion became barren. But as a boon he said that the earth would develop power to fill the khuds automatically.

The second part of the sacrelige was given to the trees and as a result they began to ooze gum. But as a boon he said that the gum of guggul - bdellium olibanum - will be treated pure and they would have the power to rebud from their roots though their upper portion may be dried up.

The third part of the sacrelige was given to the woman folk and so they experience menstruation. As a boon he blessed them to the pure or chaste on the fourth day and capable to give birth to children.

The fourth portion. of the sacrelige was given to water. As a result it is covered with aquatic plant or Shaivaal. As a boon the object in which it is added gains weight.

In this way Lord Brahma freed Indra from the heinous crime by dividing it into four places. Who so ever reads or listens this story is blessed by Bhraspati.

Once there was a young girl. She used to water a banana tree. She also used to play under it. One day a strange voice came as if fluttering from its leaves. The girl got frightened and ran away. Next day the girl was again watering the tree. She heard the same voice. She took courage. The voice said, Will you play with me? Will you play with me? The young girl looked here and there. She could locate nobody there. She started to grow weaker and weaker. Her mother noted this change. One day the mother said, My dear girl, what is wrong with you? Why are you losing your health despite best food? 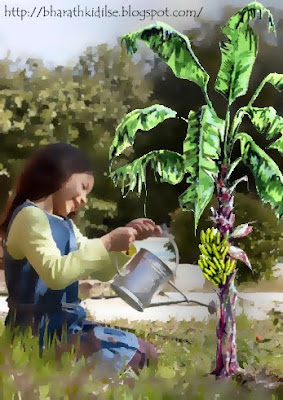 The young girl said, 1 water my banana tree everyday. I hear a strange voice from it. The voice says Will you please play with me? I see no one around me. The mother heard her daughter and said smilingly, You are a very innocent girl. The banana goddess is pleased with you. You welcome her tomorrow for playing.
The girl heard the same voice the next day. She invited her to play with her. After the play was over, the goddess of banana or Lakshmi said to the girl, Will you please accompany me to my house for lunch? The girl said, Have you a house too? The goddess took her to her palace through the hollow of the banana tree and served her with best sweets and fruit in gold and silver pots. She offered her various types of costly gifts. When the girl returned, her mother was happy. She said to her daughter, "Have you offered your friend a return visit? You must invite her next day.
The girl said, We are very poor. How can I extend invitation to her? Our utensils are broken. Our clothes are shabby and torn. We have nothing to sit upon. The mother said, Service and courtesy will compensate for them. We will dean our house and give her a warm welcome. The girl agreed to her mother advice. When she met the goddess the next day, she extended to her invitation for visiting her house. The goddess accepted the invitation. She accompanied the girl to her house the next day. The goddess had hardly stepped into the house when it was converted into a beautiful palace. The broken utensils turned into shining gold and silver ones. The shabby and torn clothes became new and attractive. The ordinary meal prepared by the family tasted like mana. As she was about to leave, the goddess blessed the family with a happy future. The girl mother requested the goddess to stay with them permanently.
The goddess said, 1 am goddess Lakshmi. I am of very unstable and fickle-minded. I cannot commit to stay with you all the time. So long as you work hard and water the banana trees, I shall be there in form of banana fruit. Your business will flourish day by day. Water banana tree, especially on Thursdays.
The goddess then disappeared from the scene leaving plenty of wealth for the family.
Posted by Bharath.K