Shanivar (Saturday) is dedicated to Shani Devta (Saturn).The Saturday fast keeps away all the hurdles and misfortunes. Saturn sits in a mirror chariot, yoked with eight black horses. The recitation of Shani Chalisa is also beneficial.

It is believed that those who have the blessing of Lord Hanuman are protected from the wrath of Shani. Therefore many people make it a point to worship Hanuman at home or in temples. Black is the preferred color on Saturday.

Shani, one of the Navagrahas, is worshipped in numerous temples and there are also temples exclusively dedicated to Sani. Devotees who are observing Shanivar Vrat usually visit Shani shrines.

Those devotees who fast on Saturday only take a single meal that too in the evening after prayers. Food prepared usually consists of sesame til or black gram or any other black colored food item. Salt is avoided by many on the day.

Shani is represented as a deity carrying bow and arrows and riding a vulture. Some devotees worship a black iron idol of Sani. Some worship the Peepal Tree and tie thread around its bark. Black colored items like sesame oil and black clothes are also donated on the day.

Shani is so dreaded that many Hindus avoid journeys on Saturday. There are also numerous tales regarding the evil effects of Shani. 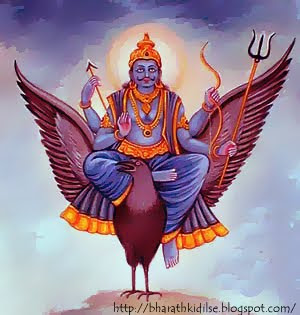 Once there was a Brahman. He used to guard against evil spirits at the king’s main gate palace. One day he heard a strange voice and was frightened. He heard this voice for a number of days. He never talked about that mysterious voice to his wife. One day his wife said, “I try to provide you best nutritious meals, still you are losing your health. What is wrong with you?” For some time, he kept mum. His wife insisted that he should reveal his internal feelings to get rid of any * unnecessary strain. The Brahman said, “I hear a strange voice every Saturday. It says that it wants to afflict the king. The duration of affliction will be either seven-and-a-half years or two-and-a-half years or two-and-a-half months or two-and-a-half days or at least for two-and-a-half prahar i.e. seven-and-a-half hours. The king can opt for any period but the affliction is a must.”

The Brahman’s wife smiled and said, “Why didn’t you tell it earlier? The king must be saved even at our cost. You accept two-and-a-half ‘prahars’ affliction for you. The spirit again visited the palace and repeated the same message. The Brahman said, “I offer to take King’s affliction upon myself. You can be upon me for two-and-a-half prahars.” The spirit was pleased at Brahman’s offer. The Brahman went to a riverbank. He wanted to spent that time in meditation. He noticed two water-melons floating on the surface of water. He caught them by their tops and placed them under his thigh. 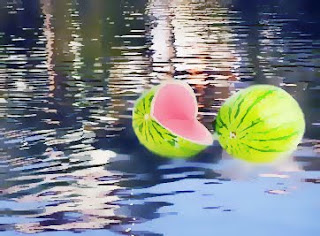 The king’s princes had been out for hunting for the last two days. They had not returned. The king was in great agony. He sent his messengers in various directions for searching out the princes. Incidentally, a messenger came to the Brahman. To his great surprise, he saw that the Brahman was hiding the heads of the princes under his thigh. He reported the matter to the king. The king was enraged. He ordered that the Brahman be impaled or hanged. The king asked the Brahman what his last desire was. The Brahman said, “Please do not kill me for two-and-a-half prahars.”

The onlookers were surprised at the sight of such a miracle. Suddenly, the princes too, appeared at the scene. The king embraced the princes and felt sorry for he Brahman. The king said, “O, Brahman! What is this puzzle?” Reveal this mystery to one and all.” The Brahman said, “The Saturn wanted to afflict you. I took your affliction upon me to save you and the kingdom. The Saturn made the water melons appear as human heads. Now could I have killed the princes? I have always been a saviour of this kingdom.” The king said, “1 don’t believe your utterings. I want to see the Saturn myself. If you do not show me, all the members of your family will be crushed in the grinder.” The Brahman began to tremble. He begged for a week’s time. He went to his house. His wife said, “You look pale and horrified. What is the matter?” The Brahman said, “The Saturn wrought the affliction on me. I was saved because I acted according to your advice. Now, if I do not show Saturn to the king, all of us will be crushed under the grinder wheels.”

The Brahman’s wife said, “Have patience. You staked your life for a better cause. God will help us.” The Brahman had a sigh of relief. His wife said, “Ask the king to get up early in the morning on the coming Saturday. Saturn will be riding a black horse under the black mountain. He will be covered with a black blanket, all soaked in oil. The king can have his glimpse.” The Brahman took the king to the black mountain the next Saturday. A black shadow was riding a black horse. The king said, “Who are you?” The Saturn said, “I am Saturn. I afflict the poor as well as the kings alike.”

The king said, “How can we avoid your affliction?” The Saturn said, “The rich should donate a black horse or one-and-a-quarter maunds of gold on Saturday. The middle-income group can donate iron and black blankets. The poor can give oil-touched loaf to a black dog. The still poorer can water a peepal tree, place some gur there and wrap the tree with a piece of kuchcha thread.” The Brahman said, “Do not afflict our king. Your affliction on the king will affect our town. I can stand your afflictions on myself in the future also.”

The Saturn suddenly disappeared alongwith his black horse and the king returned to his palace. He was pleased with the Brahman. The Brahman’s wife felt happy when the husband reported the whole happening to her.