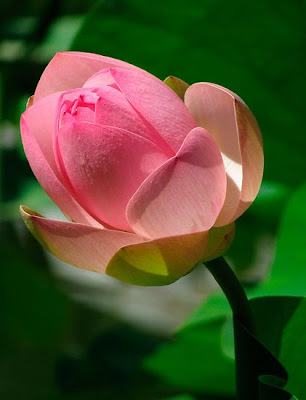 Lotus Flower is one of the most popular symbols in Hindu religion. According to Hinduism, within each human inhabiting the earth is the spirit of the sacred lotus. It represents eternity, purity and divinity and is widely used as a symbol of life, fertility, ever-renewing youth and to describe feminine beauty, especially the eyes.
Lotus flower is frequently mentioned in the ancient Sanskrit Hindu scriptures, as padma (pink lotus), kamala (red lotus), pundarika (white lotus) and utpala (blue lotus). The earliest reference can be found in the Rg Veda.

The lotus blooms with the rising sun and close at night. Similarly, our minds open up and expand with the light of knowledge. The lotus grows even in slushy areas. It remains beautiful and untainted despite its surroundings, reminding us that we too can and should strive to remain pure and beautiful within, under all circumstances.

The lotus leaf never gets wet even though it is always in water. It symbolizes the man of wisdom (gyaani) who remains ever joyous, unaffected by the world of sorrowand change. This is revealed in a shloka from the Bhagwad-Geeta:

He who does actions, offering them to Brahman (the Supreme), abandoning attachment, is not tainted by sin, just as a lotus leaf remains unaffected by the water on it.

From this, we learn that what is natural to the man of wisdom becomes a discipline to be practiced by all saadhakas or spiritual seekers and devotees. Our bodies have certain energy centers described in the Yoga Shaastras as chakras.

Each one is associated with lotus that has a certain number of petals. For example, a lotus with a thousand petals represents the Sahasra chakra at the top of the head, which opens when the yogi attains Godhood or Realisation. Also, the lotus posture (padmaasana) is recommended when one sits for meditation. A lotus emerged from the navel of Lord Vishnu. Lord Brahma originated from it to create the world. Hence, the lotus symbolizes the link between the creator and the supreme Cause.

It also symbolizes Brahmaloka, the abode of Lord Brahma. The auspicious sign of the swastika is said to have evolved from the lotus.

Another Hindu version of creation portrays the emergence of the heavenly man, Purusha, from the mundane egg which grew about him after "desire first arose in It," thrilling life through the sleeping spaces to create the first differentiation. The creation of Vishnu followed: he slept on a lotus, and a lotus stem issued from his navel. In The Secret Doctrine Blavatsky says that the growth of the lotus from Vishnu's navel, as he rests in the waters of space on the serpent of infinity, illustrates the universe's evolution from the central sun, "the ever-concealed germ" (1:379). The waters are the womb of space and the stalk is the umbilical cord.

From this lotus grew Brahma, the creator, who seated himself in the natal position on the lotus, contemplating the eternal, thus dispersing darkness and opening his understanding. Then he began his creative work as demiurgos, an act which comprises the efforts of heat and water (spirit and matter) in relation to the mundane and divine creators. This may be why Hindus use the lotus to represent nature's productive power working through the agency of fire/water or spirit/matter.

Vishnu's consort and feminine aspect, Lakshmi, at her birth surged forth from the ocean standing upon the white lotus, which is her emblem. Goddess of wisdom, love, and beauty, she corresponds to the European Venus, who also was born by rising from the water amid flowers. Lakshmi is the symbol of eternal being. As the mother of the world, she is eternal and imperishable; just as Vishnu is all pervading, so also is she omnipresent.
THE LOTUS OF THE HEART: 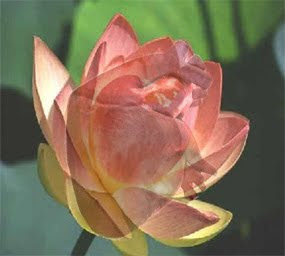