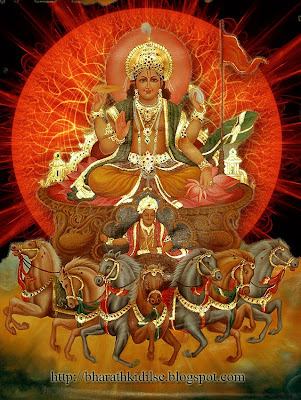 Surya Namaskara was a part of the daily ritual of our ancients. It is a wonderful regular routine of exercise, prayer and worship given in the scriptures of ancient of India. Surya Namaskara means salutations to Lord Surya. Stand facing the east at dawn and recite the mantras to pray Lord Surya and offer red sandals, flowers, rice grains (Akshatas) with water or simply water as libation and perform Surya Namaskara. It must be performed before the sunrise. Take water in a pot and mix all the materials in it and hold the pot in your fingers, keeping the thumbs aside and face the east. Chant the following Mantra and offer the libation thrice.
" Ehi Soorya sahastransho tejorashe jagatpate
Anukampaya mam bhaktya grihanarghyam divakara "

Then offer the following prayer to Lord Surya.

Dhyaeah sada savitri mandala madhyavarti
Narayanah sarashija sanasanni vishtha
Keyurvan makara kundalavan kireeti
Hari hiranyamaya vapurdhrit shankha chakrah
Surya Namaskaras There are twelve positions in Surya Namaskara. Twenty-five such Namaskaras form one Avriti (frequency). Surya Namaskara must be performed preferably in an open and airy place. Perform Surya Namaskara slowly without exerting too much or panting and puffing. There is one Mantra for each of the twelve Namaskaras- there by you also recite the dwadasa namas of Sun.
1st Position - Dakshasana
Mantra: Om Mitraya Namah
Procedure : In the first position of Surya

Namaskara contemplate the virtues of Lord Surya with concentrated mind and feel that you are the friend of everybody and have friendship with every creature on the earth. Immersing yourself with these feelings stand erect stretching your hands, neck and all other parts of your body. Stretching both of your arms, touch your thighs with palms and inflate the chest and point your vision on the tip of the nose. This is a position of attention.
Benefits: Disorders of the skin and waists are corrected, the back and the legs become strong. Focusing of the vision on nose helps to control the mind. It is an easy and effective way of attaining good health and development of personality for the students. Meditating with concentrated mind enhances confidence.
2nd Position: Namaskarasana
Mantra : Om Ravaye Namah
Procedure : Fold together both of your hands in such a way that that both the thumbs begin to

touch your chest. Expand your chest and pull in the belly as far as possible. Look straight ahead. The head, the neck and the body should remain in a straight line. Closing the mouth inhale the breath and hold it inside as far as possible and then expose the breath.
Benefits: Good for the diseases of the throat and voice is enhanced. Both mind and body become healthy.
3rd Position: Parvatasana
Mantra : Om Suryaya Namah
Procedure: Raising the arms up, stretch whole of your body backward while gazing at the

sky with open eyes. Bend backward as mush as possible, inhale and expand your chest at the same time.
Benefits: Both the shoulders and the food pipe (Esophagus) get exercise and diseases related to them are corrected. Eyesight is also improved.
4th Position: Namaskara Hastapadasana
Mantra: Om Bhanave Namah
Procedure: Inhale deeply, retain the breath and bend forward without folding the knees. Rest

both your palms on the ground and touch your knees with your forehead or the nose and exhale the breath with audible sound. In the beginning if you can't rest your palms on the ground, just touch the ground with fingers.
Benefits : Disorders of the belly and digestive system are corrected. The chest and hands become stronger and you become well balanced, beautiful and good looking. Diseases of the feet and fingers are also corrected.
5th Position: Ekapada Prasaranasana
Mantra : Om Khagaye Namah
Procedure: Inhale and pull your right leg backward in such a way that the knee and the fingers

of the foot touch the ground. The abdomen and belly must be pressing hard into the left leg. Raise your head as high as possible and look upwards. Push the waist down and hold the breath and stay in the posture as long as you can - comfortably.
Benefits : The posture stretches the small intestine and the seminal vesicles. Hence this posture helps in correcting the constipation and diseases of the liver. Thinness of the semen is also corrected. Diseases of the throat are also corrected.
6th Position: Bhudharasana
Mantra : Om Pushne Namah
Procedure: Inhale the breath deeply and hold it and pull both of your legs backward, so that

the thumbs of the feet, ankles and knees touch each other. Stabilizing the feet and keeping the head, waist, the back and the elbows in a line bend forward and resting both the palms on the ground keep your body like a bow.
Benefits : One gets relief from the pains - specially of arms, legs and the knees. Bulging waist is trimmed and it is good for the abdominal disorders.
7th Position: Ashthanga Pranipatasana
Mantra: Om Hiranyagarbhaya Namah
Procedure: Holding the breath, rest both your knees on the ground. Touch the ground with

your chest and touch the lower part of the neck with chin. Also touch the ground with the upper part of the forehead and the nose. Please note that the abdomen should not touch the ground. It should be pulled in. Then exhale the breath. Both the hands/palms must be on the side of the chest.
Benefits : This posture makes the arms strong. If ladies perform this Asana before getting pregnant, the breast fed babies could be saved from the attacks of many diseases.
8th Position: Bhujangasana
Mantra : Om Marichye Namah
Procedure: Keeping the legs, palms and knees as in Ashtanga prampatasana position above,

unfold the arms and rise inhaling the breath, push the chest out and bend the waist in a circle backward. Then rise and bend your head backwards looking up and back as much up as possible and exhale the breath.
Benefits : Tones up the body and the back muscles and improves the eyesight. Corrects all kinds of disorders related to the reproductive system, corrects the irregularities in females menstrual cycles. Blood circulation is also improved.
9th Position: Bhudharasana
Mantra : Om Adityaya Namah
Procedure: Repea

t the process of Bhudharasana as described in the step six - Inhale the breath deeply and hold it and pull both of your legs backward, so that the thumbs of the feet, ankles and knees touch each other. Stabilizing the feet and keeping the head, waist, the back and the elbows in a line bend forward and resting both the palms on the ground keep your body like a bow.
Benefits : One gets relief from the pains - specially of arms, legs and the knees. Bulging waist is trimmed and it is good for the abdominal disorders.
10th Position: Ekapada Prasaranasana

Repeat the process described in the fourth position.

Then come back to the 1st position and repeat the full round once more. Our ancients used to do 25 rounds of Surya Namaskaras, called one Avriti.