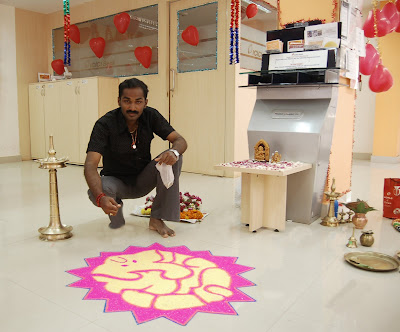 The term Rangoli is derived from words rang (colour) and aavalli (’coloured creepers’ or ‘row of colours’). Rangoli is one of the most popular art forms in India . It is a form of sandpainting decoration that uses finely ground white powder and colours. Rangoli can be use as wall art or as floor art. Rangoli is used commonly outside homes in India .

Origin
Rangoli, also known as Kolam in South India, Chowkpurana in Northern India, Madana in Rajasthan, Aripana in Bihar, Alpana in Bengal is the ancient Hindu religious floor art. According to a legend recorded in Chitra Lakshana, When the son of a King’s high priest died, Brahma, Lord of the universe, asked the king to paint the likeness of the boy so that Brahma could breathe life into him again. This is how, it is believed, the first painting was made. Also, the son of the king painted a portrait of a girl whom the son liked very much. Although, the king would not let his son see her. Rangoli also became a form of a women self portrait.

Another popular story is that God, in one of his creative episodes, extracted the juice from one of the mango trees as paint, and drew the figure of a woman so beautiful that it put the heavenly maidens to shame.

Originally Rangoli was done in small patterns — 2 feet square — but now entire floor areas of rooms and hotel foyers are covered in intricate detailed designs. Traditionally, such floor decorations were done only on auspicious occasions or festivals. But today, any occasion is good enough — weddings, birthday parties, opening ceremonies, etc. In the deep South and South West of India and Kerala, flowers are used to create floor art.
Rangoli can be improvised into diverse visual art forms. For instance, it can be used to make elaborate images that look as if they were painted.
The motifs in traditional Rangoli are usually taken from Nature - peacocks, swans, mango, flowers, creepers, etc. The designs are symbolic and common to the entire country, and can include geometrical patterns, with lines, dots, squares, circles, triangles; the swastika, lotus, trident, fish, conch shell, footprints (supposed to be of goddess Lakshmi), creepers, leaves, trees, flowers, animals and anthropomorphic figures. These motifs often are modified to fit in with the local images and rhythms.

Sacred Rangoli
The Sri Chakra rangoli is an example of a sacred form of the art. It is a geometrical figure, which has many intertwined triangles, and is considered the symbolic representation of the Goddess. In many parts of southern India , the Sri Chakra kolam is drawn elaborately, a lamp is lit, and the sacred Lalitha Sahasranamam (the 1,000 names of the Goddess) is chanted. Another well-known sacred rangoli is the Hridaya Kamalam, or Lotus Heart.Many people argue that the spirit of Hinduism is represented by rangolis. Hindus are encouraged to feed all forms of life before feeding themselves; true to this belief, rangolis are drawn using rice flour to feed even the tiny ant before the members of the household.

Traditions in North and Central India 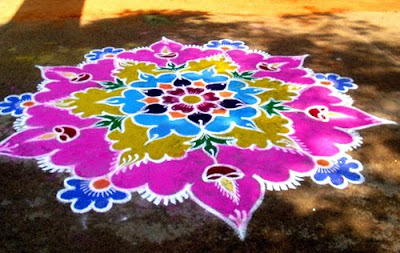 Rangoli seems to have originated from the state of Maharashtra . It is made extensively during the Festival of Lights, Diwali. During Diwali, people take time for cleaning and decoration of their houses, in order to please the 'Goddess of Wealth'. So, all the houses are lit up diyas and every nook and corner of the house is decorated.

People decorate their 'puja ghar' or 'mandir'(which mean place of worship), their backyard, verandahs, rooms, kitchen, walls and entrance with beautifully designed Diwali torans and Rangolis. Some of the popular themes of Diwali rangoli are the signs of Om , swastik, leaves of Ashoka tree, mangal kalash, lighted diyas, shree, lotus and other flowers.

In Bengal, the floor painting is called 'Alpana'. The white designs known as Alpana are found on the patio, floors and walls and on large pots and vessels. Rice, the staple food of Bengal , is the medium used in Alpana and the motifs are created mainly by women. The technique of painting using the white flour is referred as gunrichitra or dhulichitra. The designs are quite similar to the kolams or rangoli in South India .

‘Atap’ rice, non-parboiled form of rice, is used to make the powder. The short-grained variety of ‘Atap’ is the widely used one. The rice is soaked in water to soften for 5 to 6 hours and it is then dried. The rice is then ground to a fine powder. This powder is used in Alpana. One of the common methods of drawing Alpans is by creating a paste from the rice powder. The rice powder is mixed with water to create a thick paste. A small piece of paper or cloth is folded to form a wick and is dipped in the rice paste to draw various designs. Occasionally, colored dyes are also added to the white paste.

Kolam is generally drawn at the entrance of a house or any other building. Dried rice flour or other types of white dust powder is used for drawing kolams. Although there are numerous traditional kolams patterns, lot more can be created depending on the creativity of the person who draws it.

Purpose of Kolam In olden times, other than a decoration, kolam made of coarse rice flour, were used for to treat ants so that they don't have to work so hard for a meal. The rice powder is said to invite birds and other small critters to eat it, thus inviting other beings into one's home and everyday life, a daily tribute to harmonious co-existence. It is a sign of invitation to welcome all into the home. The patterns range between geometric and mathematical line drawings around a matrix of dots to free form art work and closed shapes. Folklore has evolved to mandate that the lines must be completed so as to keep evil spirits away. The design consists of 3x3 dot symmetry, 9 Goddesses Swastika Kolam with a single cycle by Nagata S.

The designs are drawn by taking the sand powder between the forefinger and thumb and by dropping the loose sand in a controlled way through their fingers. It takes a while to get the technique right. Once you do, you can design any kind of shapes and patterns.

Pookalam is an elaborate and colourful arrangement of flowers laid on the floor. During the popular festival of Onam, every household in Kerala decorates Pookalam, also known as 'Aththa-Poo' because it is considered auspicious to prepare it as a welcome for Mahabali (a king who is believed to visit Kerala during Onam). 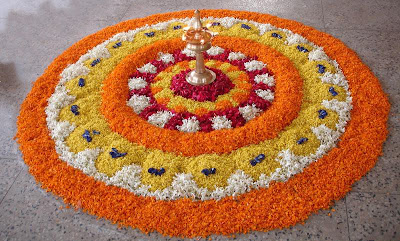 The flowers used Various flowers are used on each day as a specific flower is dedicated to 10 each days of Onam. Commonly used flowers include Thumba (Lucas Aspera), Kakka Poovu, Thechipoovu, Mukkutti (little tree plant), Chemparathy (shoe flower), Aripoo or Konginipoo (Lantana), Hanuman Kireedom (Red pagoda plant) and Chethi (Ixora). Of all these flowers, Thumba flowers are given more importance in Pookalam as they are small in size and glitter in the the soft rays of the sun. 'Thumba Poo' is also considered to be the favourite flower of Lord Shiva and King Mahabali was a devout worshipper of Shiva.

Why do people draw rangoli in front of their house? 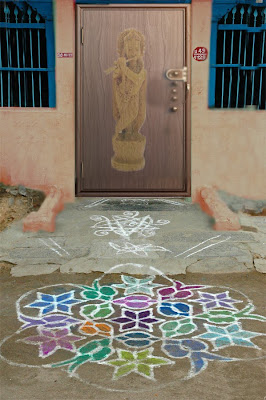 A colourful design called a Rangoli is made near the entrance to a house to welcome guests. Traditionally they are painted or created out of coloured sand/rice powder. A symmetrical design or picture (Gods, Goddess, Dancers, Diwas etc.) is drawn and coloured rice powder/sand is then layered on top to form a picture.In a traditional Hindi household, the lady of the house starts her daily chores with purifying herself, drawing some Rangoli lines in front of the pooja room and the tulsi. Her regular routine begins after this ritual. With this, her entire day remains fresh and lively.In the Ramayana story the citizens welcome Rama back from his fourteen-year exile in the forest by painting Rangoli designs outside their homes. Hindu families continue to honour this tradition today. In India some people get up very early in the morning to create a Rangoli. Later it is swept away and a new picture is painted each day of the festival. Rangoli designs are both decorative and symbolise a warm welcome and good luck.Candles and lamps are also placed outside the home in the hope that Lakshmi, the goddess of wealth and prosperity, will visit and bring good fortune and blessings to the family.