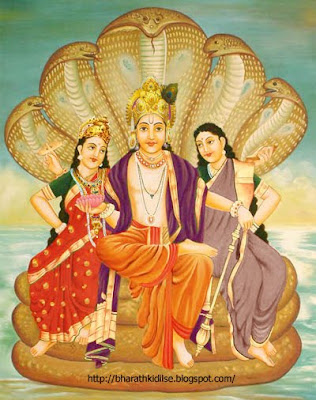 Once there were two sisters Lakshmi and Daridra. Lakshmi was the goddess of wealth while Daridra was the goddess of poverty. Though they were real sisters, their behaviour towards others and temperament were totally different. Lakshmi got up early in the morning. She took her bath regularly. She remembered God regularly. She took keen interest in her day-to-day work with a smiling face. She befriended everybody and worked till late at night.

Daridra was very lazy. She got up very late. She did not take her bath. Washing clothes was a rare occasion for her. She was very discourteous. She was as much a flirt and unthoughtful. Cruelty and awe were natural to her. She generally told lies and befooled others. She was always hated by men in the street.
Goddess Lakshmi was very much liked by Lord Krishna and he married her happily. Daridra remained alone. She became sad.
One day Lakshmi said to Lord Krishna, “My dear husband, Daridra is my real sister. She is alone. Now she is quite grown up. Please arrange for her marriage. The life of an unmarried woman is difficult in our society.” Lord Krishna said, “My love, your worry is justified. But who will accept her in marriage? Her way of living is hated by one and all. She wears shabby clothes and loiters away her time. Even an ordinary man will not take her hand.”
Lakshmi said, “Arrange her marriage with a Rishi. He would not expect much from her because most of his time he would be busy performing religious rites.” Lord Krishna agreed. He searched for a suitable match for Daridra. A Rishi agreed to marry her. Most of the Rishi’s disciples were away. He needed someone’s help in performing the ‘Yajna’.
Goddess Lakshmi was happy that a Rishi had accepted her sister’s hand. After performing her marriage, they returned to their kingdom. Daridra could not accept Rishi’s way of life. She would get up late. She would not take her bath. She would not care for the cleanliness of the Ashram. The Rishi was fed up with her indolence. He gave her up. Daridra was badly disappointed. She went to Lakshmi again. She looked very shabby and disorderly. Lakshmi felt pity for her. She said to Krishna , “Please arrange a suitable abode for her. A woman’s life without a suitable abode is difficult. I knew that habits die hard but she has a right to live in this world.”
Lord Krishna accepted Lakshmi’s request. All the three came down to earth together. Krishna spotted out a Peepal tree in a lonely corner. They went to that tree. Lord Krishna said to Daridra, “You can reside under this tree. This is a lonely place suited to your temperament. You need not clean this place daily. None would visit this place either. You may live as you please.” Daridra said, “I will be fed up with lonely life. Lonely place is an abode of ghosts. Please do visit me frequently with my sister, Lakshmi.”
Lord Krishna agreed. He gave a word to her that he would visit and stay at the peepal tree on every Saturday alongwith Lakshmi. From that day onwards, people visit Peepal tree on every Saturday. They water it and offer their prayers, knowing well that Lord Krishna and Lakshmi reside in the tree on Saturdays.
Posted by Bharath.K