In Hindu religion, each day of a week is dedicated to a particular God or Goddesses. Friday or Shukrawar is dedicated to Shakti – the Mother Goddess in Hinduism – and Shukra or Venus. 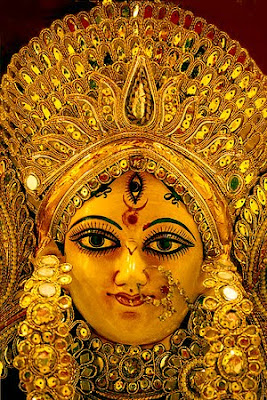 One of the most important Vrat or Upvaas (fast) on the day is dedicated to Santhoshi Matha (an incarnation of Shakti) & Maariamma. The fasting is also known as ‘Solah Shukravar Vrats because a devotee fasts for 16 consecutive Fridays. White color is given importance on Friday.

Another deity that is propitiated on the day is Shukra, who is known to provide joy and material wealth. The period of Shukra in one’s astrological chart is considered to be most productive and luckily period.

Worship of Shakti – Durga, Kali and other forms – on Friday is considered highly auspicious. Shakti temples in India attract large number of devotees on this day.
Devotees wear white colored dress on this day. The fasting on Shukravar begins at sunrise and ends with sunset. The person fasting only partakes in the evening meal. White colored food like kheer or milk is the most preferred.

Fast is kept for various reasons which include removal of obstacles, for a child, happy family life etc.

There are numerous stories associated with Shukravar. In almost all the stories, Lord Shukra or Venus is dishonored in the beginning and the devotee later realizes his/her folly through numerous untoward incidents. Then the devotee realizes the mistake and propitiates Shukra and is finally rewarded.
Guru Shukracharya 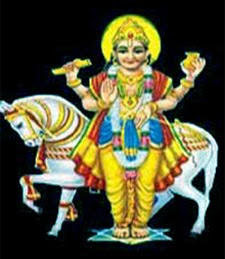 The planet Venus is known as Sukra in Vedic astrology. In astrology, the planet of Venus is considered to be the guru of demons. As a God Shukra is the Guru of Asuras. According to Hindu scriptures, He was born as the son of Rishi Brighu and his wife Ushana. The feminic natured Shukra is a Brahminical planet. He was born on Friday in the year Paarthiva on Sraavana Suddha Ashtami when Swathi Nakshatra is on the ascent. Hence, Friday is known as Shukravaar in Indian languages especially Sanskrit, Hindi, Marathi , Gujarati and Kannada. He went on to study Vedas under rishi Angirasa but he was disturbed by Angirasa's favouritism to his son Brihaspati. He then went to study under rishi Gautama. He later performed penance to Lord Shiva and obtained the Sanjivani mantra (a hymn that can revive the dead). During this period Brihaspati became the Guru (Preceptor) of the divine people Devaa. Out of jealousy, Shukracharya decides to become the Guru of Asuras. He helps them achieve victory over the Devas and uses his magic to revive the dead and wounded Asuras.

So Jupiter, or Brihaspati, the guru to the Devas, sends his son Kaca (brightness) to study under Sukra.

Sukra has a beautiful daughter Devayani (way to the gods), and she is quite taken with Kaca. Now, the Asuras know what Kaca is up to, so like all good demons they kill him. Devayani, of course, grieves for him and tells father, so Sukra repeats the mantra and Kaca comes back to life. Then the demons kill Kaca again.

Once again Devayani complains, and once again Sukra repeats the mantra and Kaca come back to life. Undeterred, the demons go about killing Kaca and Sukra keeps resurrecting him. So the demons get a particularly demonic idea and this time they kill Kaca and grind him up into a fine powder and put him in Sukra's wine. Sukra drinks the wine, Devayani begins her grieving, and in response Sukra repeats the mantra, but this time he has a stomachache as Kaca speaks from inside him. At last the demons appear to be happy.

But, they ironically bring about the very thing they were trying to prevent, for Sukra reveals the mantra of immortality to Kaca, so when Kaca tears himself out of Sukra's body he will repeat the mantra and raise Sukra from the dead.

In one story, Lord Vishnu is born as the Brahmin sage Vamana. Vamana comes to take the three worlds as alms from the asura King Bali. Lord Vishnu wanted to deceive the King Bali who was the grandson of the great ing Prahlad, in order to help the Devas. The sage Shukracharya identifies him immediately and warns the King. The King is however a man of his word and offers the gift to Vamana. Shukracharya, annoyed with the pride of the King, shrinks himself with his powers and sits in the spout of the vase, from which water has to be poured to seal the promise to the deity in disguise. Lord Vishnu, in disguise of the dwarf, understands immediately, and picks a straw from the ground and directs it up the spout, poking out the left eye of Shukracharaya. Since this day onwards , the guru of the asuras has been known to be half blind.

Sukra bestows long life, wealth, happiness, children, and property and good education. He is the Guru for Asuras. Well learned in Neeti Sastras follower of such sastras and one who dispenses justice, Sukra is considered a beneficial Devata. He blesses the devotees with power to control one's Indriyas (Sense organs) and enables the devotee to obtain fame and name.

Once there was an old woman. She used to observe Friday fasts regularly. She worshipped Shukras idol. She gave holy dips to the idol and offered best food to it as bhoga. One day she decided to go on a pilgrimage. But how could she leave the house? Who would give holy dips to Shukras idol? Who would offer bhoga to it? She conveyed her anxiety to her sons wife. Her sons wife, that is her daughter-in-law was not a religious lady. She wanted to get rid of her mother-in-law for some time. She agreed to worship Shukras idol in her absence.
The old lady felt happy and left on the pilgrimage. Her daughter-in-law being what she was, after taking her bath would squeeze a few drops of water from her wet saree and considered it as a dip for the idol. She would prepare best dishes in her mother-in-laws absence and place some crumbs or remains before the idol as bhoga. Even this was heavy for her. One day she decided to get rid of the idol. She put it in a waste paper basket and threw it on a heap of garbage. 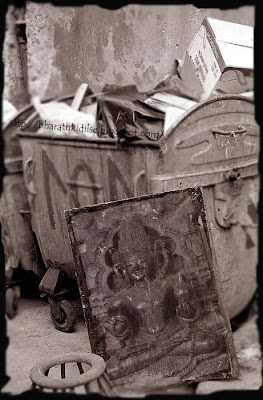 A wise lady passed by. She noticed Shukras bright idol lying on the garbage. She picked it up with great respect and brought it to her house. She gave it holy dips and offered best bhoga. She also observed fast in the name of Shukra. The lady became very rich. On the other hand, the old womans family became poorer and poorer. The family could hardly make both ends meet.
The old lady returned from her pilgrimage. She noticed the changed conditions of the family. She asked the daughter-in-law, Where is the Shukras idol? The daughter-in-law kept mum. She repeated the question, but the lady would not speak. She repeated her question for the third time. The daughter-in-law replied, I was fed up with Shukras worship. I had no time to spare. I threw it on a heap of garbage some weeks ago. The old lady was astonished at the reply. She went to the garbage heap and searched for the idol, but hod to return disappointed She decided to go from door to door to enquire about it.
She knocked at the door of a rich lady and said, Have you seen my Shukras idol? The rich lady gazed at her from head to foot and said, Are you insane? Why did you throw the idol on the garbage? You have no regards for deities. You should be punished for it. The old lady narrated the whole story to the rich lady and felt sorry for her daughter-in-law. The rich lady said, If it is so I shall return the idol to you. Lord Shukra has blessed me with health and wealth. I do not want to keep others things with me. Take back this idol with full respect.
The old lady brought back the idol and placed it at the worshipping dias. She observed Shukras fasts as a penance. Lord Shukra again blessed them with health and wealth. The family enjoyed a happy life again thereafter.
Posted by Bharath.K