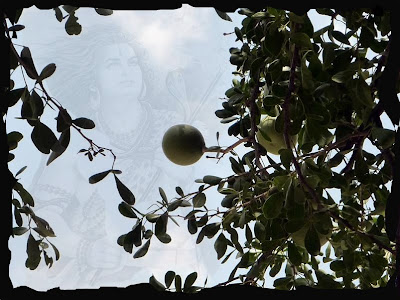 The word bilva (bel tree) is usually used as bilva-patra (leaf of bel). It is a sacred tree having sacrificial importance. Leaves of this sacred tree are generally trifoliate. This trifoliate leaf is symbolic of Trikal (brahma, vishnu and mahesh), Three eyes of lord shiva, Trishakti (Volition, action and knowledge), three lingas and three syllables of Omkar.
The bilva tree itself is so holy and auspicious that its worship or its significance is mentioned in many puranas and other scirputres at various instances. Here below is a narration of "greatness of bilva" under 22nd chapter in vidyesvarasamhita of shivapurana.
"The bilva is the symbol of lord shiva. It is adored even by the gods. it is difficult to understand its greatness. It can only be known to a certain extent.Whatever holy centre there is in the world finds a place under the root of bilva.He who worships mahadeva in the form of linga at the root of bilva becomes a purified soul, he shall certainly attain shiva.He who pours water over his head at the root of a bilva can be considered to have taken his bath in al sacred waters in the earth. Verily he is holy.Seeing the water basin round the foot of the bilva tree full of water, shiva becomes greatly pleased.The man who worships the root of a bilva tree offering scents and flowers attains the region of shiva his happiness increases, his family flourishes.He who places a row of lighted lamps at the root of bilva tree with reverence becomes endowed with the knowledge of truth and merges into shiva.He who worships the bilva tree abounding in fresh tender sprouts becomes free from sins.If a man piously feeds a devotee of shiva at the root of a bilva tree he reaps the fruit thereof, ten million times more than in the usual course.He who makes a gift of rice cooked in milk and ghee to a devotee of shiva at the root of a bilva tree will never become poor."
Mahant Rama Shankar of Banaras wrote quoting the Skanda Purana and explained the origin of Bilva tree, "One day while Parvati was resting some drops of sweat fell from her forehead on the mountain Mandara, from which grew the bel tree, Girija lives on the root of the tree, Maheswari on its shoulder, Dukshayani on its branches, Parvati among its leaves, Katyayani in its fruit, Gaori in its flowers while in thorns the numerous Saktis find a home. It is also believed that Lakshmi, the Goddess of Wealth, also lives in the bel tree." Those who perform the puja of Shiva and Parvati devoutly, using the leaves, will be endowed with spiritual powers.
Lakshmyaascha stana utpannam Mahaadeva sadaa priyam,
Bilva vriksham prayachchhaami eka bilvam Shivaarpanam.
Darshanam bilva vrikshasya sparshanam paapanaashanam,
Aghorapaapasamhaaram eka bilvam shivarpanam. 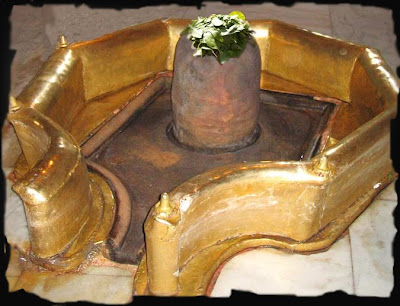 The proportion of sattva component is more in bilva patra and hence it has more capacity to absorb and emit sattvik frequencies. This has various effects. One of them is the reduction of raja-tama particles present in the atmosphere. A sattvik leaf like bilva patra when brought in proximity of a person suffering from negative energy distress then the black energy present within him is reduced. 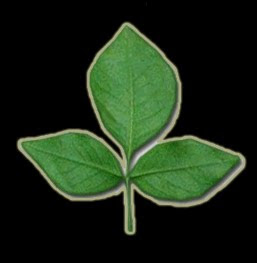 Whenever a person is affected by the distress due to negative energies then his control over his physical body, mind and intellect is reduced and control of negative energy increases. Such a person when comes in contact with an environment not conducive for negative energy for instance in a sattvik environment then there is a battle between the negative energy and the satva predominant environment. This battle can manifest at various levels. The manifestation can vary from such simple thoughts like running away from the place to destructive thoughts also. Sometimes the negative energy present in the person manifests in gross form like sudden burst of anger, shouting, throwing articles and in fact any type of destructive act like actually breaking and plundering articles etc.

The meaning of this above Sanskrit shloka offering of a bilvapatra to the three eyed god Shiva who holds a Trishula (weapon with three sharp edges) will wash away the sins committed in the past 3 lives.

* Prepare a drink from the bael fruit by mixing it with jaggery and cardamom (elaichi) powder. This drink helps you to quench excessive thirst and also prevents bad breath. Not just that, this drink also can be used in case of bleeding gums.
* Eating bael fruit with jaggery or sugar helps to clear phlegm.
* Eating bael fruits is highly recommended for diarrhea and dysentery.
* Powder 5 grams of Bael leaves and add 1 tsp of honey to it and take this twice daily, that is, early in the morning and evening to get relief from asthma.
* Powder dried roots, leaves and fruits of this tree add ghee and have it. This helps your wounds to heal quickly.
* For swellings in your joints, deseed the fruit and extract the insides to mix with mustard (rai) oil and massage it well.
* Powdered fruit added to boiled milk helps to cure anemia.
* Those with hypertension (high B.P) as also expectant mothers who have morning sickness should eat bael fruits.
* Extract juice from 100 leaves of bael, add 10 gms of pepper and have it in the morning and evening to cure jaundice.
* Bael fruit, eaten with sugar and butter is supposed to improve your memory power.
* Cometic uses: Use this Bael fruit face pack for a sagging skin.