A brass, mud or copper pot is filled with water. Mango leaves are placed in the mouth of the pot and a coconut is placed over it. A red or white thread is tied around its neck or sometimes all around it in a intricate diamond-shaped pattern. The pot may be decorated wit designs. Such a pot is known as a kalasha. When the pot is filled with water or rice, it is known as purnakumbha representing the inert body which when filled with the divine life force gains the power to do all the wonderful things that makes life what it is. 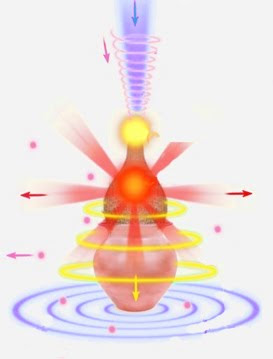 Purnakumbha literally means a "full Pot" (Purna = full, Kumbha = Pot). The Purnakumbha is a Pot full of water, with fresh leaves of the mango tree and a coconut (Sriphala) placed on the top. The pitcher may be made of mud, brass, copper or silver. Sometimes the pot is decorated with designs like Ashtalakshmis or a Swasthika.

Purnam means completion and the significance is that the endeavour undertaken must be successfully completed. It is a main part of all Hindu rituals

The Purna-Kalasha is considered a symbol of abundance and "source of life" in the Vedas. Purna-Kumbha is preeminently a Vedic motif, known from the time of Rigveda. It is also called Soma-Kalasha, Chandra-Kalasha, Indra-Kumbha, Purnaghata, Purna-Virakamsya, Bhadra ghata, or Mangala ghata. It is referred to as "overflowing full vase" (purno-asya Kalasha) in the Vedas.

The Purna-Kalasha is believed to be a symbol of auspiciousness embodying either Ganesha, remover of obstacles, or his mother Gauri, the goddess of household bounty or Lakshmi.

A kalasha is placed with due rituals on all-important occasions like the traditional house warming (grihapravesa), wedding, daily worship etc. It is placed near the entrance as a sign of welcome. It is also used in a traditional manner while receiving holy personages.

Why do we worship the kalasha? Before the creation came into being, Lord Vishnu was reclining on His snake-bed in the milky ocean. From His navel emerged a lotus from which appeared Lord Brahma, the creator, who thereafter created this world.

Kalasa was generated during the Samudramanthan or great churning of ocean. Lord Vishnu held Kalash filled with nectar during Samudramanthan. All deities reside in the kalash. Therefore it has an important place in puja ritual. 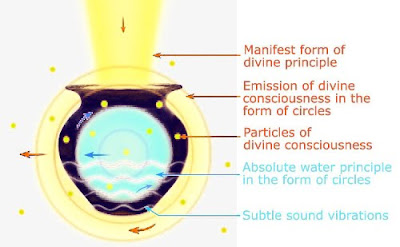 There is a certain space in the kalash which generates subtle sound vibrations which are of white colour. The manifest principle of a deity having yellow colour is seen getting attracted to the kalash. The blue circles seen inside the kalash is indicative of aap element (absolute water element). The circles and particles of chaitanya (divine consciousness) are seen projecting from the medium of kalash.

The water in the kalasha symbolizes the primordial water from which the entire creation emerged. It is the giver of life to all and has the potential of creating innumerable names and forms, the inert objects and the sentient beings and all that is auspicious in the world from the energy behind the universe. The leaves and coconut represent creation. The thread represents the love that “binds” all in creation. The kalasha is therefore considered auspicious and worshipped.

The waters from all the holy rivers, the knowledge of all the Vedas and the blessings of all the deities are invoked in the kalasha and its water is thereafter used for all the rituals, including the abhisheka.

The consecration (kumbhaabhisheka) of a temple is done in a grand manner with elaborate rituals including the pouring of one or more kalashas of holy water on the top of the temple. When the asuras and devas churned the milky ocean, the Lord appeared bearing the pot of nectar, which blessed one with everlasting life.

Thus the kalasha also symbolizes immortality. Men of wisdom are full and complete as they identify with the infinite Truth (poornatvam). They brim with joy and love and respect all that is auspicious. We greet them with a purnakumbha ("full pot") acknowledging their greatness and as a sign of respectful and reverential welcome, with a "full heart".

The kalash is used for creating seat for invoked deities during the puja ritual. First it is filled with water and then leaves of mango tree or that of betel vine are kept in it. These leaves are known as leaves of deity’s seat. The deity principle gets maximaly attracted to these leaves of seat. The water inside the kalash keeps this seat pure till the ritual of Pranapratishta (invoking deity into an image, idol, coconut or betelnut). Thus the invoked deity principle stays for a long period.

In this kalash betel nut or some coins are then put. Thereafter a coconut is set up on the mouth of the kalash. The tuft of coconut attracts the deity principle from the atmosphere and it is then transmitted to the water in the kalash through the body of cococnut.

The neck of the pot is tied with a white, yellow or red colored thread or cloth. The water is pure and clean to the highest extent. That is the reason it is able to attract the sattvik particles of frequencies of deities. But it contains less quantity of raja particles and therefore has poor capacity to project the sattva particles. 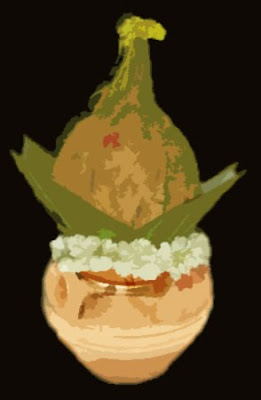 Putting a coin is symbolic of sacrifice. Through this medium there is sacrifice of wealth and jiva (embodied soul)’s attachment is reduced. This qualifies the worshipper to benefit more from the sattvikta of puja ritual. A copper coin is put in the kalash. The copper has more capacity to project sattvik frequencies. It helps in emanation of sattvik frequencies present in the water into the atmosphere.

Also a betel nut is kept in the kalash meant for puja ritual. Betelnut enhances sattva and raja components in the water of the kalash. This increases the capacity of the water to emit manifest principle of deity.The betel nut contains particles related to absolute earth element which are useful in binding of sattva particles related to sattva component.This then easily helps in retaining the sattvikta of water for along time. Five precious stones like pearl, diamond, emerald, blue sapphire, ruby and gold are also added to the water of kalash. The five precious stones and gold have capacity to attract and emit the principles of five superior deities. This benefits the worshipper. But with changing times the use of five preious stones and copper is reduced and replaced by alloys which are spiritually of less benefit.
Posted by Bharath.K